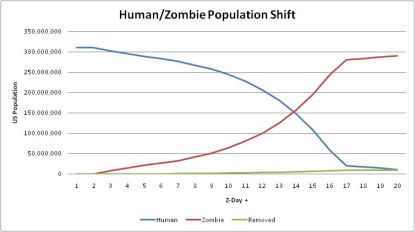 Although I don’t note this on my CV, I am, in fact, somewhat of a Zombie Sociologist (that’s a sociologist who studies zombie artefacts and accumulates zombie knowledge for public education – not a zombie who is also a sociologist). As such, I have collated some pertinent social facts* about zombies. I feel it is imperative that I share these with you.

First off, I am very relieved to see that Zombie awareness is FINALLY beginning to take hold of public consciousness. Authorities are coming forward with resources that might help us get ready for the imminent zombie apocalypse. Science tells us that ’The zombie pandemic is coming.  It’s not a matter of if, but a matter of when’ (via the Zombie Research Network). Truer scientific words have not been blogged.

The BBC has also reported that social scientists have established a link between zombies and current social problems, such as the global financial crisis and the Occupy protests. Now, while this particular BBC article is actually about pop culture’s growing fascination with zombies, but those of us (wink!) in the know understand that there is indeed a connection between rising social malaise and the zombie apocalypse. Sociology Forefather Émile Durkheim* said so. Or at least I’m sure he meant to. What – you don’t believe in the Zombie Apocalypse? Don’t fall prey to Zombie Complacency. Read on!

Last month, the Queensland (QLD) Police Department in Australia used World Zombie Day (8th of October**) to test out their disaster information website. I wasted eight minutes of my life watching their press conference. It was totally worth it to see Deputy Commissioner Ross Barnett talk with a good sense of humour about zombies – though all too briefly I’m afraid. (He spoke more seriously about natural disasters.) For the record, the QLD police learned four things from the Zombie Day exercise.

Should a zombie attack occur, or some other large-scale disaster strike, they need: better information resources; they have to fix the clutter on their website; and they must apparently also fix their mobile site. Okay – good – but as far as zombie spotting goes – boring!

Their fourth lesson was perhaps the most important of all. Behold, from the mouths of law-enforcement-PR babes:

Yes! Finally! The truth is unravelling. I know what Australian State I want to be when a zombie attack strikes!

Shermans Travel blog on the Huffington Post is another great resource. It provides a useful review of the Top 10 Zombie sites in the USA and one London site. Shermans argues that The Centre for Disease Control in Atlanta, where the rocking future-documentary, The Walking Dead takes place, is a good location to hide out during the Apocalypse. So if you live in Atlanta: kudos to you – citizens of your city have a higher probability of survival than other places. Controversially, however, Shermans list includes I Am Legend in their analysis of cities of zombie survival. Savvy Shermans readers point out that the creatures in this luminary tale of survival are NOT zombies. They are ’photosensitive cannibals’. Heed my words, people: one of the best ways to survive a zombie attack is knowing your zombies from your photosensitive cannibals! Geez! The Shermans list is a good introduction, but it is clear that more ethnographic research needs to be conducted about zombie sites in other parts of the world so that we might learn more about where and how to best survive the Zombie Apocalypse.

Keep your eye on the Zombie Apocalypse 2012 site.** It has provided an important public health service by scientifically calculating the date when zombies will rise up against humanity: the 21st December 2012. Enter it into your phone calendars! The site also offers the handy mathematical graph below, which predicts the zombie/human population shift over the first 20 day period after the Apocalypse. Equally useful is the Apocalypse Countdown meter on the site, so you will always know exactly how much time you have left before the end. Begin your debauchery now, there’s roughly only 1 year and one month left!

In my next post, I compile a list of resources to help you prepare for the Zombie Apocalypse.

*Durkheim would be turning in his grave over this sociological blasphemy! But hopefully not really, otherwise he will, in zombie fact, be a zombie. Nothing scarier than a critical thinking zombie!

** This information was brought to my attention by Professor Fransuar, from the Department of Zombie Studies, at the University of ZeeZee. AKA my brother who knows HEAPS about zombies. (“Heaps” is a real scientific measurement. True story.)

One thought on “Sociology of the Zombie Apocalypse”