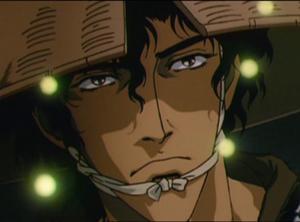 In an excellent exploration of the social construction of race in popular culture, sociologist Julian Abagond shows that Japanese animators do not, in fact, draw anime characters to personify their aspiration to be ‘white’. Instead, these characters reflect the animators’ own cultural biases – which is that Japanese people are the prototype model of the ’default human being’.

If I draw a stick figure, most Americans will assume that it is a white man. Because to them that is the Default Human Being. For them to think it is a woman I have to add a dress or long hair; for Asian, I have to add slanted eyes; for black, I add kinky hair or brown skin. Etc.

The Other has to be marked. If there are no stereotyped markings of otherness, then white is assumed.

Americans apply this thinking to Japanese drawings. But to the Japanese the Default Human Being is Japanese! So they feel no need to make their characters “look Asian”. They just have to make them look like people and everyone in Japan will assume they are Japanese – no matter how improbable their physical appearance.

You see the same thing in America: After all, why do people think Marge Simpson is white? Look at her skin: it is yellow. Look at her hair: it is a blue Afro. But the Default Human Being thing is so strong that lacking other clear, stereotyped signs of being either black or Asian she defaults to white…

When you think about it there is nothing particularly white about how anime characters look:huge round eyes – no one looks like that, not even white people (even though that style of drawing eyes does go back to Betty Boop).

Some Americans, even some scholars, will argue against this view of anime. They want to think the Japanese worship America or worship whiteness and use anime to prove it.  But they seem to be driven more by their own racism and nationalism than anything else.

As Abagond’s analysis shows, perceptions of race and gender influence how people ‘read’, understand and draw meaning from animation. For Japanese animators, their characters reflect their view of normality – that everyone in their creation is Japanese (or Korean or Chinese or wherever the anime is produced). Audiences that have an uncritical view of race and Whiteness presume that ‘Asian’ drawings should look ‘Asian’. Yet this term – Asian – means different things to different groups. In Japan, the category of Asian is not very meaningful. Instead, mainstream Japanese culture portrays the Japanese people as the ‘default human being’. Gender and class also affect how this default human being is imagined (usually male, affluent and lean).

Just all art forms embody the biases and taken-for-granted cultural assumptions about the world, what audiences see in anime drawings are mediated by the ethnocentrism of the animators and audiences. Ethnocentrism is the belief that one’s group is superior to others. Viewers who think Japanese anime characters are trying to look ‘White’ are therefore viewing this artform through ethnocentrism.

Image of Jubei from Ninja Scroll from Jinni.