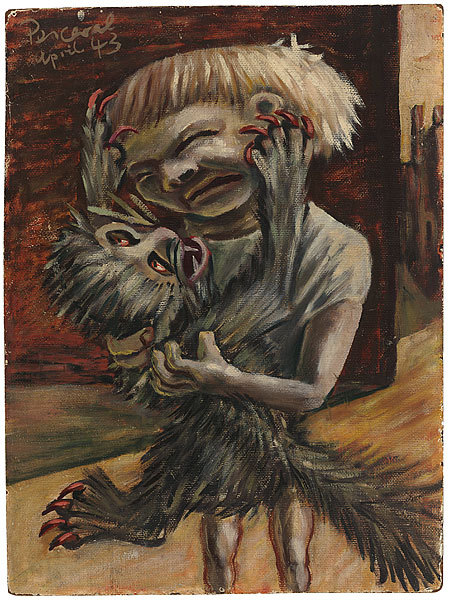 Deborah Hart, writing for the National Gallery of Australia:

Portraits of children often create a nostalgic aura around the idea of childhood, casting these formative years in a rosy glow. Idyllic portraits of children, posed in comfortable rooms or playing in gardens, accompanied by tame, loyal family pets, abound in the history of art. John Perceval turns this romantic notion on its head with his terrifying image Boy with cat 2. Here the boy is locked in a wretched embrace with a wild cat. With sharp claws bared, extended tail bristling and demonic red eyes, the feline creature looks up at the boy who has his eyes shut tight; his face contorted in pain. Gradually, as we contemplate this image, we realise that the cat is inseparable from the boy—a projection of his own tortured state of mind.

Perceval created astonishing expressive images in the 1940s. Like his friends Arthur Boyd, Sidney Nolan, Joy Hester and Albert Tucker, he was concerned about the fate of humanity during the war years, and was able to express anxieties in personal and universal ways. The emotive tenor of Boy with cat 2 recalls the German Expressionists, while the shallow stage set echoes the surrealist artist, Giorgio de Chirico.

Personal childhood memories also play a part. When Perceval was only eighteen months old, his parents’ marriage broke up and his mother departed the family home. A sense of early abandonment along with memories of his father’s violent outbursts informed his emotional and artistic landscapes. For instance, Perceval was traumatised by his father’s insistence that his small son and daughter decapitate chickens on the farm for the family meal. The difficulty of coordination for a child ‘holding a live neck in the left hand while landing an axe with the right’ was a chilling memory.[2] In Boy with cat 2 the creature rising up epitomises a desperate struggle for physical and emotional survival. Perceval’s affliction with polio as a teenager cast another long shadow.

Later in life Perceval battled with alcoholism and psychological disturbance that may partly be related to his early experiences. The intense power of Boy with cat 2 was undoubtedly informed by a depth of feeling that both points to Perceval’s own circumstances and transcends them. He reminds us that childhood is often fraught with difficulty; fodder for great art but often far from the proverbial bed of roses.
[2] T Allen, John Perceval, Melbourne University Press, Carlton, 1992, p 11.