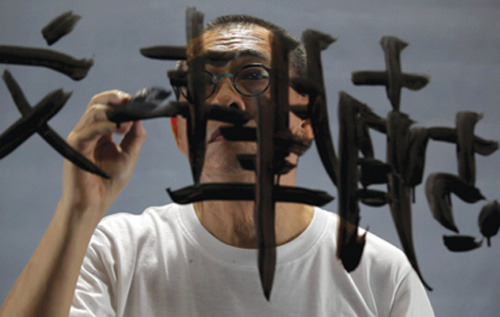 Java-based Indonesian-Chinese artist FX Harsono has used art to protest the Indonesian government and political matters for the past four decades. In recent times, however, his art has turned inwards, to issues of identity. He is now concerned with the cultural obliteration and discrimination that Chinese people have faced in Indonesia. This video performance focuses on Harsono’s search for his original Chinese name and his attempt to reclaim his Chinese identity. Macushla Robinson writes of Harsono’s piece:

In his recent work ‘Writing in the rain’, FX Harsono writes his Chinese name with a calligraphy brush repeatedly on a sheet of glass, until it is difficult to see the artist through the network of interlocking characters and drips of ink. After a while, water begins to splash against the glass and over the artist, washing away his name in a flood of black ink.

FX Harsono’s recent work deals with personal and political histories: the artist seeks to re-learn his Chinese name, which was changed by Indonesian Government mandate. This is an act that reclaims an ethnic identity and an a personal history.