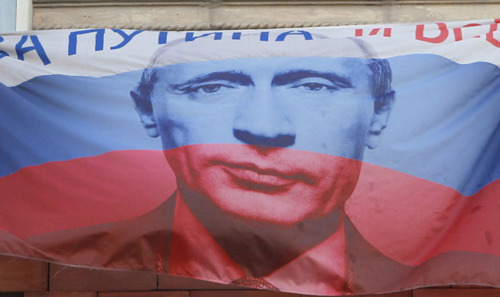 Despite the thousands of people who have protested against Russian Prime Minister Vladimir Putin’s run in Sunday’s upcoming Russian election, Sky News reports that Putin is set to win the Presidency. In an election where 110 million people are eligible to vote, Putin is likely to win 66% of the majority. Political analysts believe that Putin’s win is assured due to his popularity amongst working-class Russians who see Putin as representing national stability. If successful, this will make Putin an unprecedented leader. Having already ruled Russia for eight years as President, and serving as Prime Minister since 2008, this election will assure him another six years at the helm of one of the world’s most powerful nations. Thousands of protesters are likely to take to the streets should Putin take leadership. Sky News Moscow correspondent Amanda Walker writes:

How protesters react to a Putin victory will be a test of their strength.

How he responds in turn will be a test of how he intends to run his country when votes no longer matter.

To read more about the protests, see my post from December 2011.