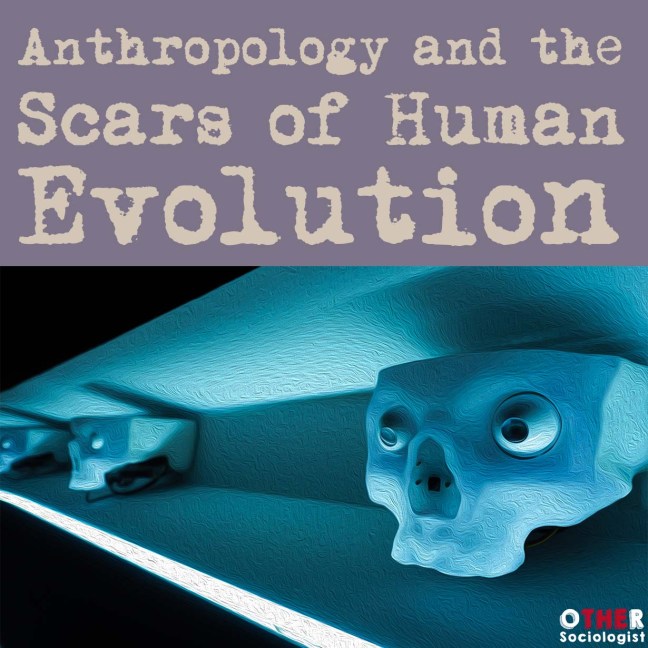 Two anthropologists, Rachel Caspari and Karen Rosenberg, discuss the Scars of Human Evolution. In a live interview for the American Association for the Advancement of Science (below), they address questions such as, “what are the downsides of evolution?” The chat covers the costs on our bodies, health, reproduction and on our aging populations. Caspari and Rosenberg pose an argument that runs counter to the way in which many people think about human evolution. That is: evolution is not always geared towards perfection. Humans have made excellent strides towards improving our quality of life, to make evolution “workable,” but we don’t often stop to think about the trade offs of evolution. All species have these evolutionary imperfections, but “It may be because humans are cultural animals, we’re able to ameliorate the effects of some of those [issues].”

The researchers answer a viewer question on why we’re one of the only species to only have one race when other species have many sub-divisions. As sociologists and anthropologists know, race is a social construction. That is, it’s a cultural idea that varies from one society to another, and changes over time. Neanderthals and modern humans were different species, but modern humans have long been a single species.

Caspari and Rosenberg argue that there are two characteristics that distinguish modern humans genetically from our ancestors:

These anthropologists note that other fields of evolutionary science continue to see ongoing diversification, including the development of new diseases and the discovery of new insects. Yet there’s no evidence that there has been increased complexity in human evolution. Looking at our history, modern humans are not the “inevitable outcome of the evolutionary process.” There is, however, increased cultural complexity amongst modern humans, which impacts on the challenges we face in the evolution process, particularly regarding our health and our procreation experiences.

The researchers answer a viewer question about whether keeping people alive who are genetically imperfect weakens our gene pool. Their answer – that incorporating the cultural idea of stigma and our relationship to our environment is problematic – is a fantastic example of social science. Enjoy!