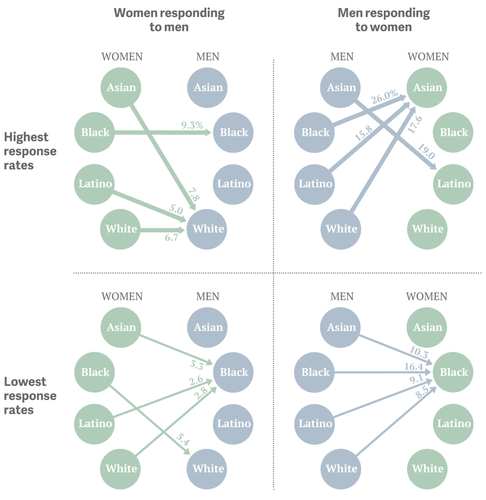 The data suggest that sexual fetishes are facilitated by technology, because people can sort through physical descriptors, thus practising sexual exclusion through their potential partner choices.

These data need to be treated with a strong measure of scepticism. This is not an academic study that is using valid and reliable measures. While the dataset is relatively big, it draws only from one app and it’s measuring message exchanges. This doesn’t necessarily mean that 2,400 people responded. The data were generated by the company that makes the app, so it is a marketing venture. Bearing these issues in mind, NPR journalist Elise Hu argues that, while the data may be skewed, it’s a conversation starter about racialised sexual fetishes:

I actually do think there must be some of the Asian fetishisation, er, “yellow fever” at play here. This just really gets in my craw, because it becomes a problem for the Asian women — Am I just loved because I’m part of an ethnic group that’s assumed to be subservient, or do I have actual value as an individual, or is it both? — and it’s a problem for men who love them — Is my husband only with me ‘cause he’s a creepster who makes certain assumptions about me and my race, or can he legitimately be attracted to me as an individual? The results of this study only perpetuate social problems for both sexes involved.

On the flip side, it’s glaring how much everybody prefers white guys and doesn’t respond to black men and women. And white men never have to question whether they’re attractive to others because of a fetish, that’s for sure.

Racial fetishes are not the same as having a preference for a particular “look” such as hair colour. Fetishes are not the same as people in intercultural relationships, where both people respect one another’s individuality and manage difference with respect. A fetish, where someone only dates a person because they’re a particular racial group, is a practice tied to a history of colonialism.

Sexual stereotypes are damaging. The sexualised Asian woman is a narrow understanding of Asian femininities. This fetish is about subservience. In Western pop culture, Asian men are not seen as sexual beings. Latin men, and Black men and women are characterised as hypersexual and dangerous, while Latin women are conquests. (I wrote about these sexualised stereotypes in film, on my research blog).

Though most people who have a racial fetish may not recognise it, the way in which modern day popular culture perpetuates these sexual stereotypes is steeped in power and domination.

White able-bodied heterosexual men stand outside this sexual fetish hierarchy. This is the outcome of white privilege, which benefits white men most and places all other groups into subordinate roles.

While most women who use the Are You Interested app are most interested in dating White men, this preference reflects how Western culture confers White heterosexual men special advantages. White heterosexual men are both desired and able to benefit from their position. Other minorities are objects of desire, but only under certain idealised conditions.