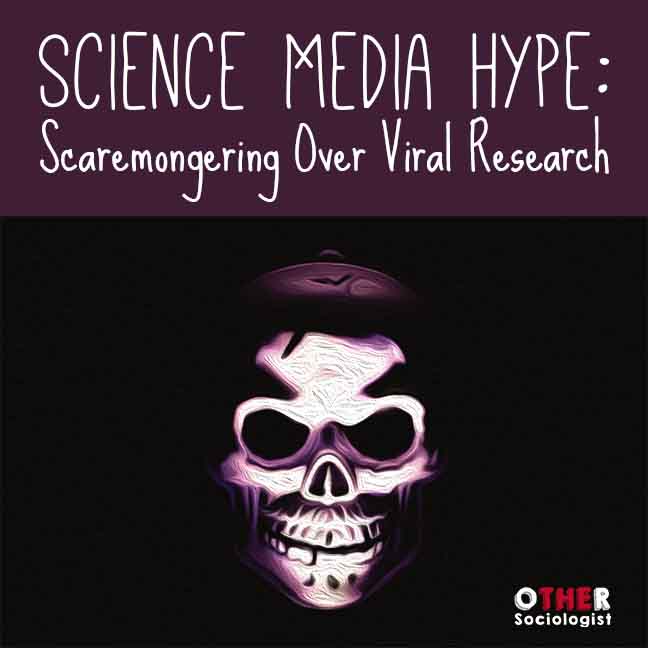 I first wrote this post for Science on Google+ and the response has been highly emotional and very far removed from the evidence presented. My interest in this story is on the epidemiology of disease, given my work on the sociology of health. Misinformation on the spread and management of infection can severely impede public health campaigns. While bioethics is an important issue to openly debate, the fact is that this particular story about virology research has been hyped up by journalists. The media created a moral panic using doomsday scenarios about what might happen if this research “escaped the lab,” without seriously reviewing the researcher’s body of work, as discussed in the post below.

I’ve previously written that when people think about scientific risks regarding a topic they are uninformed about, they are less likely to support such risks if they have vested interests such as political or personal biases. I’ve also shown how public trust in science is also influenced by education and belief systems. Bad science reporting only serves to complicate things by presenting sensationalist views (see my post here).

You may have seen the media circulating a sensationalised story about the research by Professor of Virology, Yoshihiro Kawaoka, who works at the University of Wisconsin-Madison. Kawaoka studies influenza viruses, specifically the “molecular mechanism of interspecies transmission of the virus leading to influenza pandemics in humans. His previous research explores genetic compatibility between swine-origin influenza virus (S-OIV), a contemporary avian flu (H5N1 virus) and human influenza viruses. He also examines why, in rare cases, viruses such as avian H5N1, H7, and H9N2 become transmitted across animals species to humans even though they do not spread efficiently from person to person.

His work is also important in understanding why some influenza viruses affect some groups of people more than others, such as in a study comparing swine-origin H1N1 influenza virus in mouse models from Norway, Osaka and California (see images). The study showed the that pathogenic strains possibly develop in response to aberrant immune responses in some people, leading to lethal results in a minority of humans. Vaccines are imperative but they have limited viability, and so combined therapies appear to be more effective.

Sites like The Independent, The Daily Mail, Gizmodo and others have run scaremongering headlines such as – “Scientist creates new flu virus that can kill all of humanity.” These news reports emphasise that Kawaoka’s ongoing research is unpublished but they claim that his work is reckless and divisive amongst the scientific community. The fact is that all research remains unpublished until it’s gone through peer-review; there’s nothing under-handed about this, it’s simply the scientific process.  These news stories make it seem like Kawaoka is manufacturing viruses that might easily escape into the public. This fear is unfounded as there have been no reported breaches of protocol. This is nothing more than irresponsible reporting. Research labs are closely monitored. There is enough of Kawaoka’s research available in the public domain to demonstrate its scientific rigour and value.

Social science research shows that media hype shapes public responses to disease. Misinformation about the epidemiology of illness – the spread, causes and social dynamics of disease, can severely impact how the public responds to both epidemics and pandemics. Kawaoka’s research evaluates the transmission and generation of pandemic viruses across various species and to people. This work is important because influenza viruses do not spread consistently across populations. We need to better understand these patterns in order to plan and prevent pandemics that might otherwise severely impact public health. Poor science reporting serves to spread fear, rather than educate and ultimately undermines public health efforts.

As our Science on Google+ Moderator, Professor Rajini Rao, points out:

there is no truth to the claim that the scientific community is split over this research. The news sites do not provide credible links to substantiate this claim because it’s not true. This sort of viral research is not unusual and it is the basis for making anti-viral therapy. Unfortunately, this sort of media hype  comes up at regular intervals.

Check out these past debunking posts that delve into misinformation about similar research, by Prof Rao and Dr Tommy Leung.

If you still have questions after reading this post read this analysis of the unfounded critiques of the virology research in question.

All cited research has been conducted by teams of researchers, with Prof Kawaoka being one of several authors, and not necessarily the lead investigator.