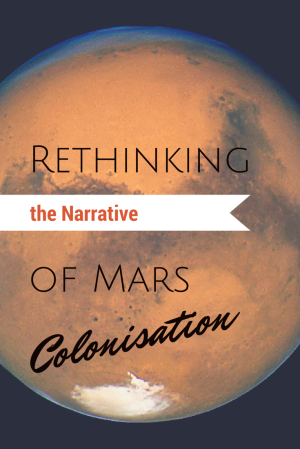 Biologist Dr D. N. Lee has been doing an amazing job educating on how enthusiastic narratives of “colonising” Mars are problematic. On her Twitter, Lee notes that the dominant ways of talking about colonisation add to the marginalisation of under-represented minorities in Science, Technology, Engineering and Mathematics (STEM). If we want to make science more inclusive, we need to better understand how the stories we tell about STEM may exclude and damage under-represented groups we are trying to support.

Lee notes that talking about Mars in terms of colonisation is not simply an issue of semantics – for example using “settlement” instead of colonising. Rather, media narratives unquestioningly champion rich White men’s ideas about what Mars travel should mean: “we don’t have to be stuck on Earth!” The narrative is being framed around “saving” humanity. (See a Storify of Lee’s discussion for further context.)

Lee asks: saving from what, whom, and why? And in this re-imagining of humanity’s salvation, who is left behind? Who does the dangerous, under-paid work of building new colonised spaces? In short, what have we learned from history about colonisation? It is rooted in exploitation and inequality. On Twitter, Lee writes:

“When I hear scientists discuss “for the good of humanity” I check who is talking and if they listen to “others.” History AND Contemporary events have demonstrated how often people will exploit and harm ‘others’ when diverse ppl cant inform policy… If Mars will be better place (where the wealthy are clamoring to) & earth is the place to be “stuck”, then WHO is stuck & w/ what resources… In human history there’s a profound diff in exploration, recon, even trading with other peoples vs Imperialism, conquering & colonization…Thing is, when Some of us hear Colonization, Enterprise Expansion, New wealth acquisition, we have a VERY different Movie trailer playing”

Lee is clear that space exploration is not the problem; she is questioning the context of talking about Mars as a place to colonise, as a way to escape problems on Earth, which have arisen as a result of colonial practices in the first place.

Lee demonstrates that White male entrepreneurs encourage the public to give up on our responsibilities on Earth, both environmentally and socially. They do so in ways that mirror the colonisation of Indigenous cultures.

Lee shows that this Mars narrative is exclusionary. The reaction to her discussion amplifies this exclusion.

White male space enthusiasts have been arguing back at Lee on Twitter, saying that Mars represents an opportunity to start over; to get social justice right. They tell her that if she continues to be “negative,” she will miss out on the opportunity to engage with the future of space science, because the public will turn off her. One White man even said to Lee the equivalent of: We need women like you on Mars to procreate! (As if women’s special place in this brave new world is solely to reproduce, rather than her scientific practice and the leadership she is demonstrating.)

Former NASA engineer Homer Hickam was one of the men who dismissed Lee’s conversation as “silly.” Hickam is someone Lee says she looked up to (Hickam’s life story inspired the movie October Sky starring Jake Gyllenhaal). She tried to engage him in a discussion about why the points of view of people of colour (POC) matter. She discussed colonialism and White male privilege. For example, his views as a White man dominate STEM, but her views as woman of colour are dismissed.

Hickam responded that he is proud that his ancestors had social privilege because that means they were successful and earned their place in colonised spaces. He applauds manifest destiny more than once. He evoked a Native American ancestor to justify his racist comments (whilst celebrating the tenacity of his White ancestors to colonise). Hickam derided Lee’s concerns as a fellow scientist because she is a woman of colour. He then blocked her, effectively shutting down the conversation about inclusion. As a senior figure in STEM with greater social power, Hickam proves Lee’s argument, that only White men’s views are allowed respect in STEM.

Lee notes that if we can’t get the conversation about diversity and inclusion right, here and now – then how can we ever hope to restart afresh elsewhere?

Why Understanding Colonialism Matters in STEM

Exploration can happen in many ways, and these do not necessarily have to involve exploitation, enslavement, dispossession, rape, genocide, removal of children from their communities, being forced into missionary settlements, forced to convert religion and violently made to assimilate. Colonialism only happens through violence – including all the methods mentioned, which have happened to Indigenous groups around the world. This colonial violence continues in the present day.

Indigenous Australians were the first to migrate out of Africa 75,000 years ago. Their population was decimated when Europeans arrived in Australia in 1788. The colonisers declared Australia “terra nullius” (uninhabited land). Indigenous Australians, like all other Indigenous groups, have suffered violence and inequalities ever since. In fact, right now, the Australian Government is forcing 150 Indigenous communities off their ancestral lands in Western Australia. This will make 12,000 Aboriginal people refugees in their own country.

Why is this happening? Because the Government says living in these lands is not economically viable and wanting to live there is a “lifestyle choice” the Government does not support. More to the point, these communities are set up on land that is rich in natural resources. Other parts of Western Australia are just as remote, yet business and Government made them viable so mining towns could be set up.

So the point Lee makes about colonial narratives is valid and pressing: rich White men make decisions that adversely affect minorities. They talk about these decisions in ways that replicate historical violence, and in so doing, they compound inequalities happening on Earth. Lee is saying: why would Mars be any different if Indigenous and POC perspectives are being forced out of discussions and policy making?

Imagine you are a young Indigenous child intrigued about space. Indigenous groups, including in Australia, already have many sacred stories about the stars that have influenced science. Indigenous Australians may be “the world’s oldest astronomers.” What a great way to connect Indigenous youth with STEM careers! But now imagine they see these media stories, where White men conceive of space travel in colonial terms, while at the same time they are living through their communities being pushed off their lands. They also see only a few brave people of colour, like Lee, standing up to big-name White men in STEM, while these leaders and other so-called “allies” are calling this Black scientist “silly.”

We have so few Indigenous groups in STEM as it is; the numbers in astronomy can be counted in one hand when we look at gender breakdowns in different locations.* So why would these minorities want to join a STEM profession if White scientists want to assert their right to ignore historical violence? STEM pushes out minorities in many ways; this is just one example.

Language is not benign. Language matters for diversity and inclusion, as do the ideas informing our choice of words, and the stories we choose to weave, and those we ignore.

Lee’s Storify only covers the first day of comments; Lee fended off racist push-back for a couple of days. I encourage you to go to Lee’s Twitter feed to read how she further connects her argument to discussions about diversity in STEM.

Lee’s key point is on the importance of framing STEM stories in a more inclusive manner. It’s not just words; it’s the thinking behind these words that also influences how we teach and learn science; it’s how existing policies are maintained; it’s how some voices continue to shout down Others.

For a complementary perspective, see science artist Glendon Mellow’s tweets, where he uses an art metaphor. The culture, training and perspective of the first artists and architects sent to Mars will shape how the new world is designed. If that view is White, male and framed around colonialism, that will be reflected in the infrastructure.

The conversation we need to have: how can we learn from Lee’s arguments to make science more inclusive? How might we use this perspective in our teaching and advocacy? How can we use post-colonial theory (study of how history of colonial oppression shapes modern-day inequalities) to support diversity and inclusion?

On inclusion of Indigenous groups in STEM:

Read my other posts on Indigenous Australians:

About the ongoing impact of colonialism in Australia:

The most recent Australian Census of 2011 finds that 548,400 people identified as Aboriginal and Torres Strait Islander origin, representing 2.5% of our national population. This was an increase of 21% since the previous Census in 2006. New South Wales has the highest number of Indigenous Australians (32%), while the Northern Terriory has the highest rate of Indigenous people as a proportion of the population of any state (27%). Victoria has the smallest proportion (1%). This photo from the Share the Spirit event celebrating Survival Day. #survivalday #Indigenous #IndigenousAustralians #Australia #indigenous #melbourne #sociology #health #visualsociology #sociologyofmelbourne #australianbureauofstatistics #absstatistics #victoria #Melbourne #igersmelbourne #survivalday #australiaday

In 2013, Michael Mansell, lawyer and activist from the Palawa, Trawlwoolway and Pinterrairer people, noted that "Australia is the only country that relies on the arrival of Europeans on its shores as being so significant it should herald the official national day." Earlier this week, Former Australian of the year Dr Tom Calma, Aboriginal elder of the Kungarakan tribal group and a member of the Iwaidja tribal group, argued that Australia Day/Survival Day is an opportunity to learn about Indigenous history, something that is not formally acknowledged as part of our national celebrations. Pictured here is raper PHILLY, WembaWemba man based in Melbourne, and winner of last year's Unearthed, who was amazing onstage at the Share the Spirit festival. He had many skilled MCs join him as guests. Hosted by @songlines_music #survivalday #australiaday #IndigenousAustralians #Indigenous #Melbourne #victoria #Australia #history #sociology #visualsociology #socialscience #sociologyofmelbourne #music #philly #igersmelbourne #WembaWemba #philly #michaelmansell #tomcalma #Palawa# Trawlwoolway #Pinterrairer #Kungarakan #Iwaidja #rap #hiphop #sharethespirit #songlines

49 thoughts on “Rethinking the Narrative of Mars Colonisation”