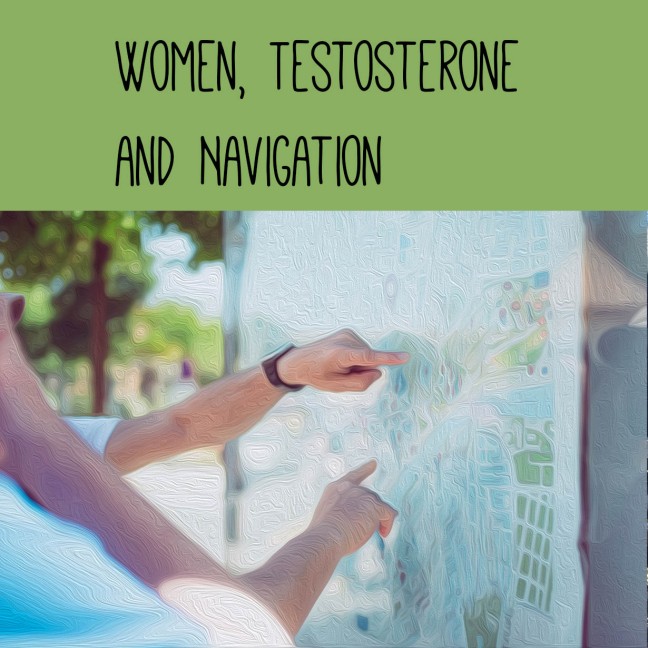 As usual, science hyperbole would like us to believe that men are “hardwired” to perform better than women at technical tasks. In this article by Science Alert, the heading tells us women navigate better when given testosterone: “Women can navigate better when given testosterone, study finds” The article itself keeps up this facade. Reading the study, however, we find that nothing of the sort is true.

Fifty-three women were recruited on the basis of being on the oral contraceptive pill and not having significant experience in gaming. Why did the latter matter? Because this experiment uses computer games to simulate navigation. The study does not actually test navigation in real life conditions. That’s usually okay – experiments try to construct experiences in a controlled environment. But when those conditions are created to exclude women with certain skill sets that immediately tells us that what is being measured is not biological processes, but rather experience – a social experience.

Women who game – the fastest growing group of gamers – are excellent at navigation of simulated environments, proving, in fact, that women are more than capable in picking up navigation skills with practice… you know, same as men do. (Studies that try to link technical skills with biology as this study does, to suit a contrived evolutionary psychology hypothesis, fail to account for social experience. This study is no different.)

Women who game, whose existence disproves the flawed biological argument put forward by the researchers, can’t be included in such a study as they immediately disprove the preposterous premise that navigation is mediated by testosterone.

Back to the study: the women were asked to come off the pill a week before the experiments (the pill has elevated levels of estrogen which would counteract with the additional hormones provided in the study). A few of the women were later disqualified from the study due to experiencing nausea during navigation tasks (resulting from the additional testosterone) as well as due to not competing the tasks correctly (AKA human – not biological – error).

Twenty-one women were given a small dosage of testosterone, another 21 women were not. Both groups completed a series of tasks. In some tasks both groups performed slightly differently, in many they preformed the same. Notably, the women on testosterone did not navigate better. Instead, in some tasks where the two groups differed, the key observation was that there was a slightly different level of activity recorded via fMRI, a machine which in this case measures brain activity but does not specifically tell us why that activity differs.

Given the machine can’t give us this explanation, the researchers asked the women to explain why they made the navigation choices they did. When we ask people to describe their experiences and choices, are we measuring biology? Nope. We are measuring social processes.

The researchers did not actually prove that women on testosterone navigate better than those who do not have extra testosterone. It is equally noteworthy that the researchers did not measure what happens to men when they’re given an extra dose of testosterone. If they had, the likelihood that a similar shift in brain activity may be recorded during some tasks would be worth commenting on, in so far as increasing hormones can impact brain activity of anyone. And yet still, if they had sampled men with and without additional testosterone, the fMRI would not give the researchers the answers they sought, as they would still rely on questionnaires to figure out why men make the decisions they make.

Men’s answers, like the women in this study, would reveal social patterns about decision making that reflect cultural narratives. That is, when some groups of White women who don’t play online games are asked to describe why they make certain choices about navigation, they would reflect back socio-cultural reasons which would differ from White men, and which differ again from White women who do game, and which would differ from Indigenous Australian women who live in remote regions, and so on. Our social experiences shape our decision-making and our exposure to certain types of navigation has an impact on our skills.

This study has not proven what is being reported. It simply shows that brain activity can be affected by increased testosterone, without leading to demonstrable changes in navigation skills. That’s not the story being reported on here.

Finally, as with all science media hyperbole, sampling matters: 21 women from undisclosed ethnic groups (the omission tells us they very likely they were White women) do not represent all women. We already know that psychology and cognitive sciences extrapolate on findings from Western, Educated, Industrialized, Rich, and Democratic (WEIRD) societies to make universal statements that simply are not true (http://goo.gl/H8rlHb).

In the end, this study only tells us we should remain wary of poorly designed research and even more cautious about incomplete science “journalism.” In the words of psychologist Jane Hu, “Writers, we need to stay vigilant and look beyond the easy gender narratives. Readers deserve better.”