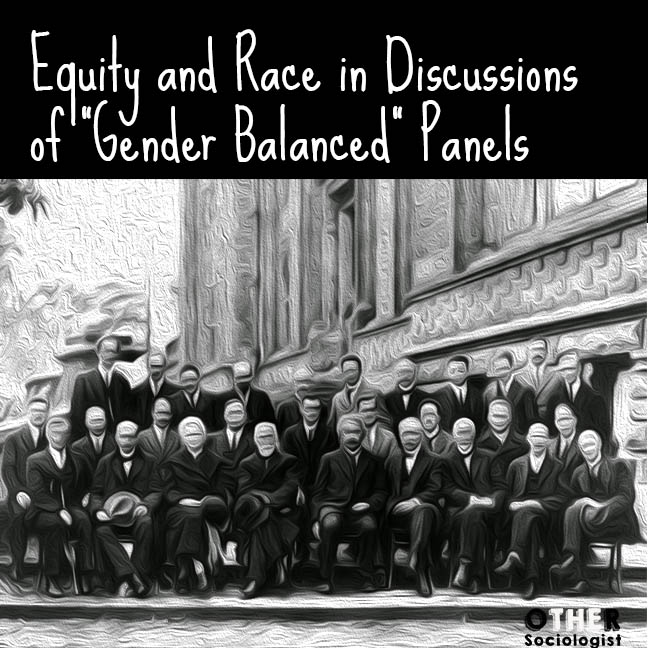 There is increased pressure for conferences and events to stop excluding women as speakers, in science and in other fields. Yet there is less public attention on racial equity and representation of other minorities on panels. I take a look at a few recent examples where White people will focus on lack of “50/50 gender balance.” This phrase is often a proxy for seeing White cisgender people as the desired equilibrium. This excludes Indigenous people, other racial minorities and other under-represented groups. Let’s review what happened when the Royal Society of New Zealand announced its 150th anniversary celebration, the committee debating Brexit, and the pattern on social media, where White women unfollow gender discussions that focus on racial justice.

Without diversity guidelines and processes within science academies, seemingly independent, “merit-based” awards and appointments will continue to perpetuate inequity. The latest example is the Royal Society of New Zealand, which recently announced its line up for its 150th anniversary lecture series. All the speakers were White men. This is despite the fact that the Society has recently rebranded with a focus on diversity.

Each speaker was selected independently by our 10 autonomous branches. We're working hard to achieve balance in our other events #diversity

What’s happened with the Royal Society in New Zealand, where no White women, Maori and other people of colour were selected for 150th anniversary lecture series is not new. The Australian Academy of Science used the same “independent” process which led to no women Fellows inducted into the Academy in 2013.

Science is done by people; in Academies, they’re some of the brightest in their fields, but all people have biases. This is why we need checks and balances. Academies and other science organisations need equity and diversity guidelines plus training. These groups also need to collect and publish data on progress, and continually evaluate their processes and outcomes.

Similarly, having only one White woman is not the only problem in the picture below. Political discussions need diverse representation. But White people only see the issue through a prism of Whiteness.

Few women trusted with the macho task of Brexit, it would appear. On either side. https://t.co/jg7wTBTJy5

White people who care about gender equity have a tendency to think in terms of cisgender men and women (see the #AllMalePanels campaigns).

Race is a major barrier to gender equity for people of colour. White women don’t see how they exclude women of colour and femmes. It’s detrimental to our rights. As far as gender equity along other axes (eg. disability, sexuality, class), White women are also elevated, even within these underrepresented groups. White women’s rights are not women’s rights.” Gender and racial justice must always be pursued alongside other issues.

I don’t mind who follows and unfollows, but I am a researcher and so this trend is striking. White women scientists think they’re not biased, but clearly some of them see racial justice as being separate from gender equity. They switch off on discussions of race and racism because they think this doesn’t concern them. But when I talk about gender equity, they rush to hear what I have to say. This is an outcome of whiteness: race seems “invisible” to White people because their race is not a barrier in life. Race doesn’t impact on their experiences of gender, which is why they see racial inclusion as someone else’s problem. They only see my work valuable to them when I don’t talk about race.

As a woman of colour, this speaks volumes about where White women’s “allyship” lies; and that is only to other White women. This was evident in discussions of the Women’s March. If women of colour are being forgotten in the way White people see and speak up about “gender balance,” then that is no longer a campaign for gender equity. It is the machinery of White supremacy.

There is no gender equity without racial equality.