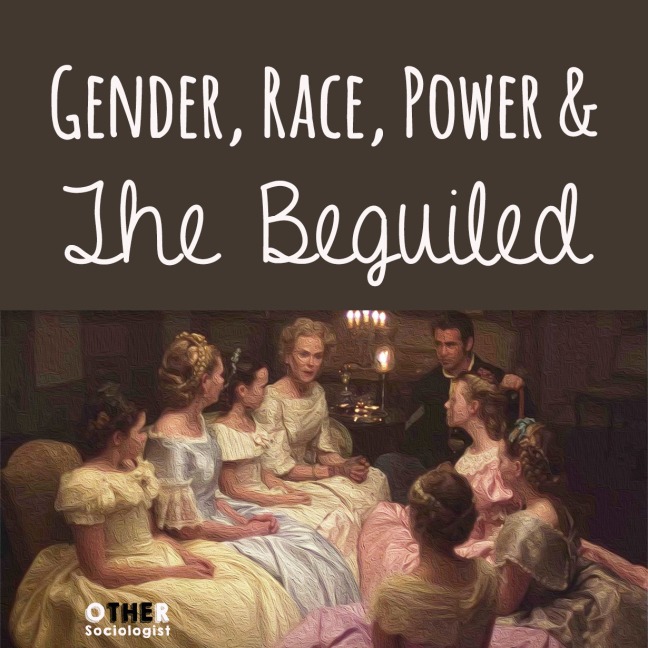 How do White women perpetuate gender and racial inequality in film? A new adaption of the 1966 novel and 1971 film, “The Beguiled,” is hitting the silver screen. The original story opens with a limping, dirtied White man, John (also nicknamed “Mr B”), played with relish by Clint Eastwood. The audience knows the violence and lies he’s capable of, as we see flashbacks that contradict his charm. He is an Unionist soldier injured in battle towards the end of the American Civil War. He staggers his way to a secluded boarding school for girls and young women, where he is nursed back to health by the older women, a mixed group of begrudging and bemused ladies who are stifled by their secret desires. The 2017 version has already built up high praise, with director Sofia Coppola being awarded Best Director at the Cannes Film Festival. This is the first time the prestigious award has been given to a woman. Coppola explains why she chose to erase the character of Hallie, a slave woman who features prominently in the original. I emphasise Whiteness in her language below. Whiteness is a concept describing how White people don’t acknowledge how their race is central to their worldviews and contributes to racial oppression:

“I really thought it was interesting because it was a group of women all living together, all different ages with different stages of maturity, and how they interact. It’s a group of women kind of isolated in the world… I’m definitely attracted to stories about female characters, and characters that I can relate to. I’m interested in stories of groups of women together…  At the heart of the story, it’s really about the power dynamics between men and women that are universal, but that are sort of heightened in this kind of premise.”

This may seem “natural” to White people: why would a White woman relate to a Black woman character? This logic is how Whiteness works: by taking for granted the power dynamics of race.

Coppola did not grow up as a White woman on a Southern plantation during the Confederacy, and yet her interview begins with the journalist explaining: “It was precisely this interaction of desolation and Southern confederate femininity that drew Coppola to the project.” White women’s “isolation” on a Southern plantation draws Coppola in. It is beautiful; she characterises it as gender unity (”a group of women all living together”). The White women are characterised as “all different;” so, even though they are White, they are individuals. Their age and maturity are markers of their worthiness as distinct characters.

Hallie (played by Mae Mercer, pictured right) is the sole Black woman character in the original story. Her presence alone would disrupt Coppola’s picturesque vision of gender unity. In the original film Hallie is a major character as the third co-star listed in the opening credits, and she is the third character to be introduced onscreen, working on the yard. Her existence as a slave is both a reminder of the violence that White women are capable of, and the violence that is to come.

Hallie’s otherness is emphasised as a contrast to John, who also disrupts the White women’s bonds and loyalties through sexual manipulation. Early in the story, John says to Hallie they should become friends, “We’re both kind of prisoners here, you and I.” They exchange quips about slavery, with John saying Hallie should be glad about the aims of the War. She remarks, “You White folk are all the same,” noting that White men on both sides were not really fighting for Black liberation from slavery but for their own interests.

Hallie shows signs of resistance. When the White women trade racist sneers about having to work on the garden (slave work), she reminds them that’s the only way they’ll be fed.  She’s wise to John’s manipulations, unlike the White women who either distrust him because he’s a Unionist or fawn over his good looks and illusions of romance. We’ve seen in a flashback that Hallie has been raped by the brother of the White woman who runs the school. Having previously sold off Hallie’s partner, who ultimately escaped and was never heard from again, Hallie scatters comments about the controlling and jealous nature of White men.

As the film descends into greater betrayal and escalating violence, John ultimately threatens Hallie with the possibility of rape using racist and sexist logic.  Hallie stands defiant and warns him he won’t get a chance. There is much to consider about Hallie’s character, and how she is clever in her pithy observations, even though she is at risk from both the White women and White men that surround her.

We won’t get a chance to ponder Hallie’s role further in the 2017 reimagining of the story, as Coppola elected to whitewash colonial violence from the plantation setting in which the story takes place.

People of colour relate to their own ethnic and racial groups as well as White people. Our survival depends on understanding White people’s culture alongside race, gender and other social dynamics. People of colour also find ways to partly empathise with deeply flawed White movies, books and other art, or salvage some enjoyment in spite of our critiques, because our own fiction is marginalised. In contrast, White people can move through the world exclusively consuming works by other White people and never notice how this shapes their racial identity and how their narrow perception feeds racism, whether or not they are conscious of their racial biases. This is what Peggy McIntosh terms White privilege: it is a special form of cultural power; it is the “permission to escape or to dominate.” Or to put it another way, it is both the benefits that go with being White, without noticing the protections and advantages this confers, as well as the ability to be oblivious to race (including unconscious bias), and the option to wield race to one’s advantage (discrimination).

For Coppola and other White women, it is taken-for-granted that “power dynamics” between (cis) men and women “are universal.” This is an illustration of Whiteness and heterosexism: White people are constructed as the default of humanity, and heterosexual people are the natural order. Whatever seems “normal” to them must be so for all people, even when people of colour, gender minorities, and those belonging to multiple marginalised groups are pushed out of narratives.

On why Hallie’s role was melted into another White woman character in her adaption, Coppola insists:

“I didn’t want to brush over such an important topic in a light way. Young girls watch my films and this was not the depiction of an African-American character I would want to show them.”

To put it another way: the inclusion of Black Americans is so important that they cannot be included at all.

This is not about being respectful of Black people; it is about the protection of White women. While White women are fond of characterising gender power as a struggle between a gender binary, between women and men, they fail to see that first, there are more than two genders, and these are hierarchical, with cisgender people elevated above all others. Second, White women have gender and race power over women of colour and femmes as well as having advantages over men of colour. Gender and race remain manifestations of power, especially over Black people, whose ancestors were enslaved, and Indigenous/ Black people who were both enslaved and dispossessed as is the case in Australia.

Erasing Black women slaves from a film set during a period of enslavement is an enaction of gender power available only to White people. Black people would never fathom making such a case. White women like Coppola ignore two crucial points. First, White women benefited from slavery. Second, White women today continue to benefit from slavery. For example, being in control of a story set in slave times and removing enslaved women is power. It is an example of White supremacy.

White supremacy is not just Nazis in Germany in the 1940s; it’s not simply the KKK in 1960s America; it’s not just One Nation’s rise in 1990s and beyond or Reclaim Australia in the present. White supremacy is a theoretical concept used to illustrate how White people are positioned as superior to other groups. Media, including the arts and film, have been central in establishing the dominance and acceptance of White supremacy. White people don’t find it strange that Black people are removed from stories or that they don’t appear at all. White people will protest the casting of people of colour in movies. White people defend Whitewashing of characters that are originally written as people of colour. Or, in the current depiction of Wonder Woman, White people will also pretend that a White Jewish woman “counts” as a woman of colour, even though she is actually White.

That the Whiteness of films and in other spheres of life is not peculiar to White people is White supremacy at its core. It is the outcome of deeming racial minorities so insignificant, so difficult to include, their stories so unworthy—so inferior—that people of colour are not given equal opportunity and equal representation.

When Coppola says she wants to protect “young girls” from depictions of the historical context of slavery, she means her White audience. Slavery would tarnish Coppola’s famous visual aesthetic of lavish beauty, already on show in the trailer. Yet The Beguiled is a story of sexual violence. In it, White women compete with one another over a White man and then gain revenge using violence. Next to this tale of White women’s vengence, slavery is positioned as “too political” to include, in Coppola’s words (“a lot of Trump signs” she says about the hindrance to production). The depiction of violence involving White women is emancipatory, interesting and alluring. The violence inflicted on Black women by White women is too ugly to consider in 2017, despite the ongoing racial, gender and class injustices in the USA, France, Australia and beyond.

Hallie is the White women’s slave in The Beguiled. To include this is to remind White women of their culpability in racial oppression. The original film sets up and reinforces the women’s fear of the Unionists. They are clearly, very obviously, anti-abolitionist. The fact that Coppola removed the only Black woman character shows she has latitude to envision the story in a new way. From what the trailer shows Coppola has made other changes, notably removing the grime of the original film. Erasure of a Black woman was not the only option.

Finally, Coppola argues that true gender equity, one that includes racial inclusion, is beyond her control, despite this being her sixth full-length feature:

“I would love to have a more racially diverse cast whenever I can. It didn’t work for this story, but of course I’m very open to stories about many different experiences and points of view.”

White women never seem to find a way to include women of colour.

The film was shot on the same plantation site as Beyoncé’s Lemonade album. The photo below is the embodiment White supremacy, as The Beguiled’s White women cast members recreate an image of Black women’s empowerment, while they shoot a film that erases Black women.

Black people are cool, but only as a pop culture reference point, away from the world where White women run around plantations, thinking they are exempt from racial and gender oppression.

17 thoughts on “Gender, Race, Power and The Beguiled”