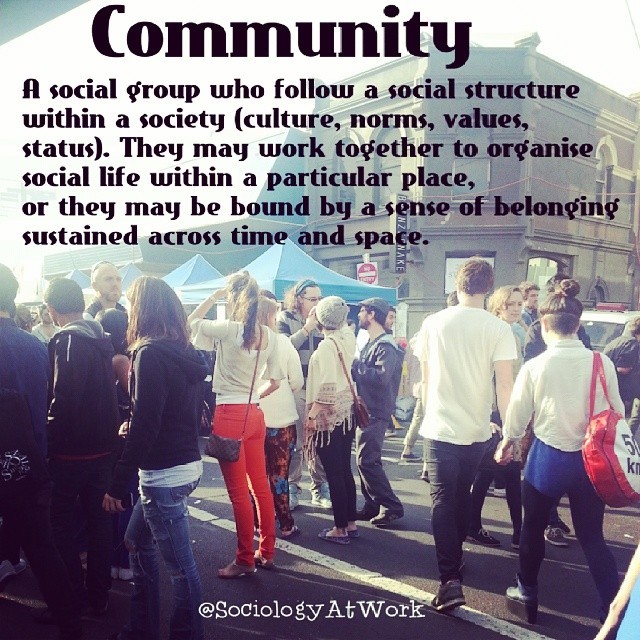 In sociology, we define community as a group who follow a social structure within a society (culture, norms, values, status). They may work together to organise social life within a particular place, or they may be bound by a sense of belonging sustained across time and space.

We start students thinking about community using the work of Ferdinand Toennies. He used the concept of gemienschaft to study the close social ties in rural and pre-industrial societies, where everyone knows one another and bonds overlap. For example your local grocerer is also your neighbour, you socialise together and you may be their children’s teacher. Gesellschaft is the opposite. Toennies used this to describe urban, post-industrial communities where people don’t necessarily know their neighbours and locals have specialised roles. You may not know your grocerer by name or associate outside their shop.

Toennies sees the former as an ideal community and the latter as a problem.

Durkheim and other sociologists have argued against the idealism of this typology as close-knit communities are more likely to adhere to traditions that demand strict obedience and reinforce individual oppression. Debates about community continue to this day, affecting the work of applied sociologists who address disadvantage. Some communities are held up as an ideal and so resources are allocated to groups who appear to conform to policy definitions of a “good community.” Other communities are stigmatised so programs either neglect their needs or focus on their deficiencies rather than their strenghts.

Have a think about how definitions of community might affect applied sciology. For example, I took this photo over the weekend at the Hispanic Street Festival in Melbourne Australia. This event is one of the ways that multiculturalism officially recognises and supports minority communities: by sponsoring community shows revolving around food and music. Social welfare, political recognition and other community issues of difference gain less social attention and funding.

Sociology defines culture as something we do (social practices). It involves using things such as dress and food to communicate our social belonging to particular groups, as well as using other physical resources (materials). For example, wealth influences our ideas about what “good” culture is or isn’t. If you’re middle class you may see graffiti as a nuisance, but if you’re poor or working class street art is a form of social resistance and community expression. END_OF_DOCUMENT_TOKEN_TO_BE_REPLACED

Society is “the complex patterns of #social #relationships.”* Sociology textbooks sometimes define society as “people who interact in a defined space and share culture.” This definition doesn’t quite capture the reality of our globalised lives where cultures flow across borders.

Postcolonial theories study the history of groups who were forced to leave their homelands due to slavery, conflict or other disasters. Around 20 nations dispute their territories and some groups such as the Kurdish and Romani are dispersed across various countries. Societies therefore have a connection to geography but they are not necessarily defined by place. Societies are made up of institutions that socialise us, providing the norms, values, laws, and rules that organise our #behaviour and cooperation.

Sociology literally means the study of companionship. It comes from the Latin “socius” meaning “companion” and the Greek “logos” meaning “the study of.” Another way to think about this: what makes up #social membership? How and why do people form different social groups? What are the societal structures that shape social interaction and subsequently give our lives meaning? Comte first popularised this term in 1824. He sought to investigate the laws of society using methods from the natural sciences. Later sociologists developed different methods that were less about cause and effect and more about the complex interactions between individuals, history and social institutions like the law, economy, religion, medicine, media, and so on.

This photo comes from the Penguin Dictionary of Sociology by Nicholas Abercrombie, Stephen Hill and Bryan S. Turner.