sociology of the mundane

The Atlantic has featured the work of an American sociology postgrad, Esther Kim, who rode Greyhound buses for two years. Kim’s ethnographic research focuses on how passengers adhere to unspoken rules of public behaviour: remain quiet, don’t make eye contact, and don’t sit next to undesirable people who are “crazy”, “smelly”, overweight or loud. The article discusses Kim’s application of Erving Goffman’s theory of symbolic interactionism. This is a framework to understand the way in which people convey social meaning through verbal or unspoken visual cues or rituals. In this case, by positioning one’s body so as to exude a message of “don’t talk to me”, Greyhound passengers actively try to create a measure of privacy for themselves within a confined public space. People who break these unspoken social norms of behaviour are confronted by other passengers.

Kim’s work studies this form of long-distance public transportation as a place for social isolation. The management of public space is interesting to understand, because it is a facet of everyday life that often goes on unexamined.  Our behaviour in public spaces rests on unspoken assumptions and interpersonal policing of social norms that are not enshrined formally by law. Most of us learn the rules for public behaviour at a young age and we don’t necessarily question why these rules exist or their social consequences. In the case of Kim’s work, social isolation leads to disengagement with others. 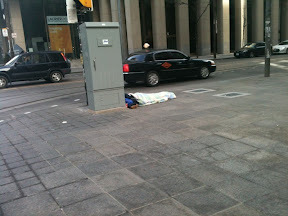 These are two of my favourite protest signs from the Funny or Die post celebrating gay, lesbian, bisexual, and transgender human rights justice in the USA. The first one elevates what heterosexual people take to be routine (“spend time with my family”) and mundane (“buy milk”) as well what is taken for granted: “be treated equally”.

The second one points out how the power behind the fundamentalist Christian reading of the bible can be simultaneously: ridiculous, out-dated and taken out of context. Fundamentalists often defend the exclusive sanctity of heterosexual marriage by quoting the bible. This sign reads:

We can quote the bible too: A marriage shall be considered valid only if the wife is a virgin. If the wife is not a virgin, she shall be executed. (Deuteronomy 22:13-21.)

The other photos are also amusing; I just love the sociological impact of these two.

My Tumblr series on The Sociology of the Mundane will pick up where the wonderful Journal of Mundane Behaviour left off. This journal took its name from sociologist Wayne Brekhus, who argued that sociologists were overly concerned with deeply political issues, but that we spend little effort on the everyday matters that are often dismissed as trivial, such as humour, friendship, watching TV, and even the boring aspects of everyday sex. Brekhus writes: ‘The unmarked generally remains unnamed and unaccented even in social research.’