In the March-April 2018 edition of visual sociology, I travel to Auckland, Brisbane and Melbourne, and a whole lot by night. Plus, the sociology of trolleys is good to us.

Last weekend, I gave a talk on “Ending Sexual Harassment in Science, Technology and Maths (STEM) and Academia,” at Kiwi Foo, in Auckland, New Zealand. The discussion was really wonderful, with many thoughful stories shared about experiences of harassment and how to take collective action. In particular, we talked about how men can be better allies to women and femmes. Kiwi Foo is a weekend getaway, with 180 participants who either stay on site camping or in dorms, or nearby the camp grounds. It is an “unconference” where the schedule of talks are not pre-determined by organisers. Instead, everyone comes together on Friday night and puts forward sessions and people can combine their sessions together if they are closely aligned in topic. The sessions are less about the presenter talking – no PowerPoint slides – just setting the scene and then facilitating discussion. The other talks were wonderful and gave me much food for thought. 10 March 2018 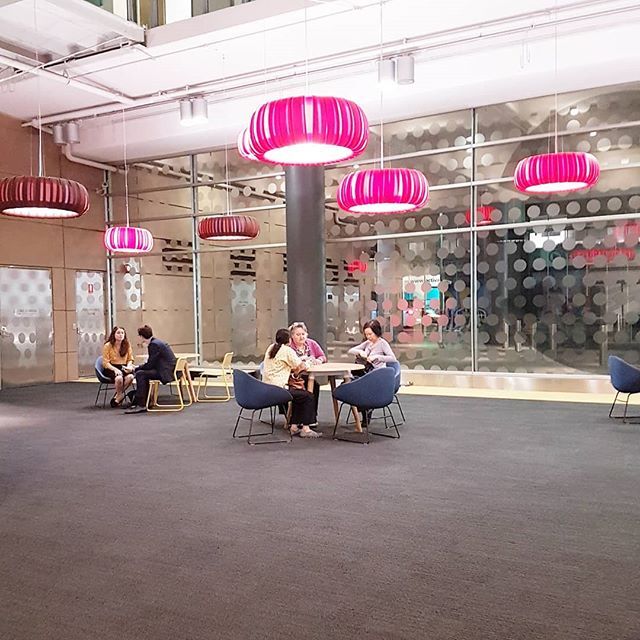 I was in the audience for Q&A last week. It was really fun! They have live music for audience members, who are free to float around for an hour until it’s time to film. We also stayed almost an extra half an hour for extra filming which goes online. The panel discussed how trashy politics has increasingly become as well as, worryingly, taking away citizenship from dual citizens who travel to conflict afflicted areas. 11 March 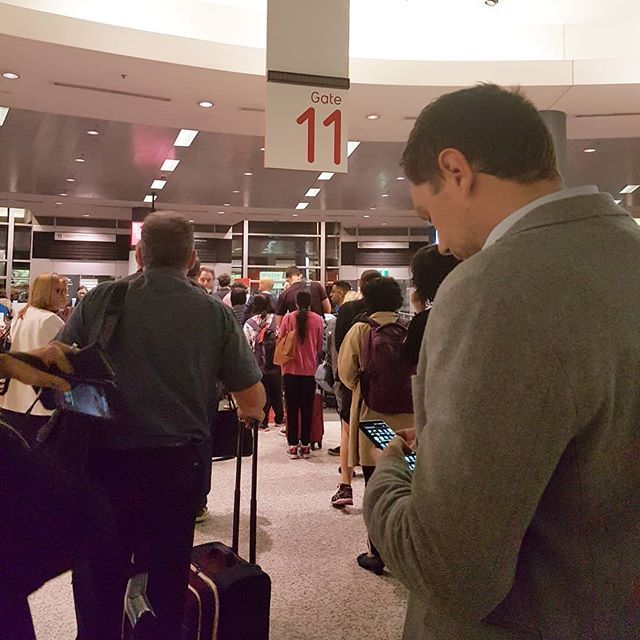 What are you looking at? Mass, Ron Muek. 31 March 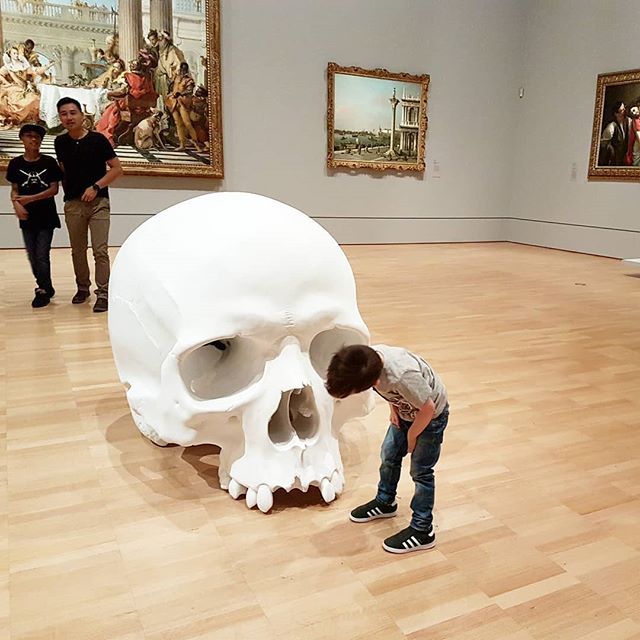 END_OF_DOCUMENT_TOKEN_TO_BE_REPLACED

I’m featured in the ABC investigation into sexual harassment in Australian science. “It’s important that they [Academy of Science] don’t stay silent because silence tells the rest of the science community that any woman who speaks out is going to be met with a wall of nonresponse, non-action, that she’s alone and it discourages survivors from coming forward and reporting…”

I’m off to beautiful Auckland in Aotearoa (New Zealand) for Kiwi Foo! My second time Fooing.  Last time was wonderful. I was very apprehensive before arriving, because while I’ve lectured, done dozens of conferences, and led hundreds of presentations and workshops, Kiwi Foo is an “unconference,” which I’ve never experienced. It is a unstructured event where none of the day talks are pre-organised. Instead, the 150 participants arrive on Friday night, introduce themselves to everyone else one by one and then together negotiate individual talks and panels. The idea is to put your idea for your talk on the wall (newbies first) and then see if others are talking on a similar theme and try to collaborate. A broad aim of the conference is to bring together people from many fields to work together on a better future. END_OF_DOCUMENT_TOKEN_TO_BE_REPLACED

In this February 2018 edition of visual sociology, we do fielwork in the Inner West of Sydney, we travel to Melbourne to speak at a panel, and we come back to Sydney for the last gasp of the Lunar New Year and Mardi Gras celebrations.

Whilst out on fieldwork, the Sociology of Trolleys gets informed! This trolley is a mature age learner who knows it’s never too late to seek out new knowledge. 9 February

END_OF_DOCUMENT_TOKEN_TO_BE_REPLACED

I’m at an Indigitek event at Google. Nancia J. Guivarra and Wayne Denning will be speaking about how to encourage Aboriginal and Torres Strait Islander youth into science, technology, engineering and mathematics (STEM).

Derek Harte from Google begins the event, speaking on importance of diversity on innovation and importance of Indigenous talent to the future of technology.

END_OF_DOCUMENT_TOKEN_TO_BE_REPLACED

A new year, a new visual sociology! In January 2018 edition, we see colonisation and travel for an equity keynote speech.

“40,000 years is a long time. 40,000 years still on my mind.” This iconic street art mural will be restored. It stands on Lawson Street, opposite the busy Redfern train station. Pained in 1983 by Carol Ruff, the project has been awarded $38,000 by the City of Sydney to re-beautify the art. Ruff will not be involved due to illness. An exciting community project!

END_OF_DOCUMENT_TOKEN_TO_BE_REPLACED

Ones Country – The Spine of Our Stories by Bangarra Dance Theatre was phenomenal. The dancing was based on mythology and storytelling from North East Arnhem Land, the Torres Strait Islands and contemporary Sydney. Nathu was about the elusive cycad nut; Place was about being Black and gay (incredibly pertinent given the recent success of the national postal survey on marriage equality that was passed by the Senate at the end of 2017); and Whistler was about the sacred significance of the dugong, a grey whale-like marine mammal. They’ve been protected by conservation legislation since 1999.  END_OF_DOCUMENT_TOKEN_TO_BE_REPLACED

Another Cine Latino film: Woodpeckers (Carpinteros). Unsettling but excellent Dominican film entirely focused on Afro-Latino characters. Julián (Jean Jean) is awaiting sentencing when he’s put into one of the “less hellish” prisons in Najayo. That is to say, an overcrowded, filthy and violent place where many prisoners sleep on the concrete floor. Julián is second generation Haitian-Dominican. In a terse exchange with his brother, we learn he is an entrepreneurial “low level” criminal who doesn’t want to be locked into a low-paid menial job.

Julián quickly earns a job communicating with Yanelly (Judith Rodriguez), the girlfriend of another high-profile inmate who is banned from an open area. Men and women communicate across prison using invented sign language which changes often to stop guards from learning conversations. Julián is soon captivated by straight-talking Yanelly.

The guards and inmates are all Black, and while it’s not ideal to have yet another film focus on crime, it is a story with complex characters. The film is highly violent and it deals with sex, anger and high octane emotions in a compelling way. The film is billed as partially depicting true events and the extras are all prisoners. The film makes for a searing sociological study on social norms and institutional functions. One long, continuous take as Julián walks tautly across the prison is utterly breathtaking.

All the actors are tremendous, but Rodriguez as Yanelly will linger in your memory.

Photo: The Other Sociologist. [Entrance to a cinema with the word “Palace” over the doorway. A man looks at his phone in front of the door.]

At CineLatino, the Latin American film festival, I watched, You’re Killing Me Susana, starring Gael Garcia Bernal. As always, his performance is charming and the movie has lots of affable comedy. But his character and the story is not endearing. He is an unfaithful and selfish husband who does not take any interest in his wife and her writing. He is disparaging of her teaching, which supplements her writing aspirations. He has repeatedly talked his wife out of going away on writing trips because he is suspicious and jealous. END_OF_DOCUMENT_TOKEN_TO_BE_REPLACED