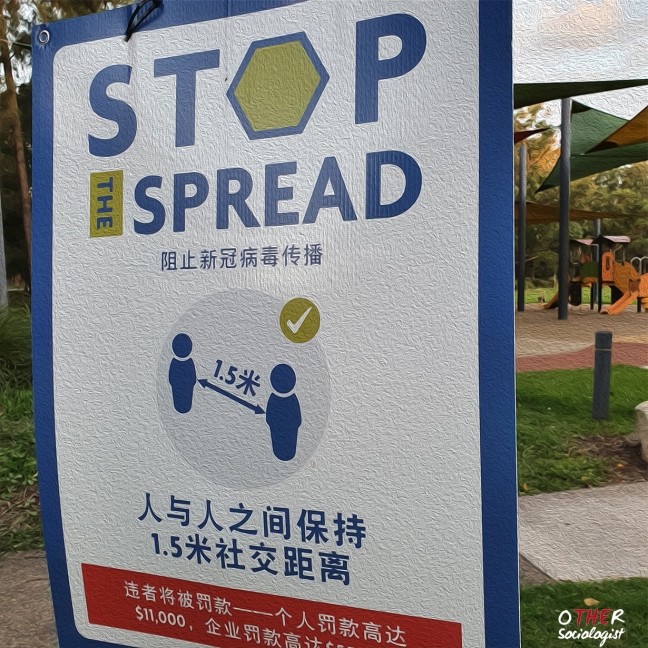 Postscript: see a companion analysis in a separate post, “Race, Class and the Delta Outbreak“

In Episode 3 of Race in Society (video below), Associate Professor Alana Lentin and I lead a panel about how mainstream media create sensationalist accounts of the pandemic, and the proactive ways in which Aboriginal people and Asian people in particular lead their own responses. We spoke with Dr Summer May Finlay, a Yorta Yorta woman and Public Health Researcher at the Universities of Wollongong and Canberra. In our video below, she details how Aboriginal community controlled health organisations have effectively dealt with COVID-19 using social marketing campaigns. We also chatted with Dr Karen Schamberger, an independent curator and historian. She covers the history of Australian sinophobia (the fear of China, its people and or its culture), and how anti-Chinese racism plays out in media reports on racism and the COVID-19 pandemic.

Media and officials continue to blame racial minorities in a way that does not feature for white-majority communities, some of whom are boldly defying the lockdown. Why does this happen? Our Race in Society series provides broader cultural and historical context.

In our Race and Society panel from 10 September 2020, Dr Summer May Finlay, discussed her co-authored article (with Dr Mark Wenitong), on the leadership of Aboriginal community controlled health organisations (ACCHOs) during the COVID-19 pandemic.

Summer details that each ACCHO has a Board of Aboriginal and Torres Strait Islander people from their local community. She says there are over 140 ACCHOs around the country, who run over 300 clinics. The first was established in Redfern in 1971. Summer details how ACCHOs were established because these communities saw that their members were not receiving adequate healthcare, due to institutional racism.

Summer notes that as early as February 2020, the ACCHOs started promoting public health messages as the first infections were reported. This included basic principles of physical distancing, sanitisation, and wearing masks. This work began before the World Health Organisation officially declared the pandemic. ACCHOs recognised that their communities faced increased vulnerability, due to multiple chronic diseases, otherwise known as non-communicable diseases.

Summer says that ACCHOs were successful in preventing COVID deaths among Aboriginal and Torres Strait Islander people due to swift delivery of culturally relevant messages, which were deployed across multiple channels, especially on social media.

“Aboriginal and Torres Strait Islander people are huge up-takers of social media… We know how to actually engage, and we know each other, and we trust each other. And sometimes the government just has to get out of the way, and just allocate the funding to the ACCHO sector, to make sure that they can get on with the job of taking care of their communities, and the government can get on with the job of making sure that they’re funded adequately. But we also know that the ACCHO sector is heavily, heavily monitored. Largely, in my opinion, because of a mistrust in Aboriginal organisations that’s driven by racism.”

Dr Karen Schamberger’s work has primarily looked at anti-Chinese riots during the Gold Rush period, in particular at Lambing Flat in 1860 to 1861. Karen describes that the riots began due to land and resources disputes; land which was originally taken from the Burrowmunditroy clan of the Wurundjeri Nation. At that time, New South Wales (which was then under British rule) had signed the Peking Treaty of 1860 with Qing dynasty China. Some politicians were reluctant to impose anti-Chinese immigration legislation after the riots. Media reports on the riots varied, but some focused on racist stereotypes, such as reports that Chinese migrants were misusing water, that they are unhygienic, and that they were sending earnings overseas instead of spending in the colony. The riots led to the establishment of the New South Wales Police Force, who enforced various anti-Chinese laws.

Karen says this history plays out in the current pandemic:

Summer says that in order to take a racial justice approach to media reporting, we need a greater diversity of voices in journalism. In particular, Aboriginal and Torres Strait Islander people talking about issues.

“We’ve just seen the report on the lack of diversity in mainstream media. And I think that is largely one of the issues that we face is there’s a lack of understanding of the importance of those voices. And also, that viewpoints may differ from white Australians.”

Summer says this was illustrated in reporting of the Black Lives Matter protests. Media stories incorrectly predicted that the marches would lead to increased COVID-19 cases, which did not eventuate. Summer argues that media is fixated on naming and shaming, blame, and a deficit discourse when it comes to Aboriginal and Torres Strait Islander people.

“We need to have robust, diverse conversations that not just focus on what’s happening in our communities that may not be positive, but also looking at our strengths within our communities. Because you don’t get to be a population surviving colonisation for as long as we have if we are not a population of people with extensive strengths.”

Karen says that media reporting during the pandemic should focus on the structural reasons for the spread of the virus amongst essential workers, particularly those on temporary visas or those who are casually employed.

“Not being able to take paid leave or being subjected to unsafe working conditions is not just a problem for those workers, it also becomes a problem for the whole of society. And I think we need much more discussion around that in the public sphere. I also think that media reporting should work to counter stereotypes. So, rather than focusing on aspects when people of colour have done something wrong, we need to be much more mindful of people’s confidentiality and right to anonymity. And actually be tried in the courts rather than by media.”

SBS News. (2020, August 17). The lack of cultural diversity in Australian TV news has been revealed in a new report. SBS News. https://www.sbs.com.au/news/the-lack-of-cultural-diversity-in-australian-tv-news-has-been-revealed-in-a-new-report

2 thoughts on “Media Representations of Race and the Pandemic”