Storify is closing and over the coming weeks, I will be migrating my posts to my blog. This is an archive of my article first published on Storify on 24 September 2014.

In September 2014, the United Nations, the Geena Davis Institute on Gender in Media, and The Rockefeller Foundation published a study on the representation of cisgender people on film. Here I report on the major findings and include some of my related social media posts.

The study conducted by Dr Stacy Smith, Marc Choueiti and Dr Katherine Pieper included 120 globally released movies in 11 major film regions: Australia, Brazil, China, France, Germany, India, Japan, Russia, South Korea, United States, and the United Kingdom. The study included almost 5,800 speaking or named characters. The researchers find that, globally, only 31% of speaking roles in films are given to women and less than a quarter of films are centred on a woman protagonist (23%).

The study finds that girls and women are slightly better represented in the UK (38% of speaking roles), Brazil (37%) and Korea (36%). Women and girls’ representation in Germany (35%) and China (35%) is relatively worse, but gender inequality is even more entrenched in India (25%) and the USA and U.K. (24%). This is especially alarming since Hollywood is the biggest exporter of films globally and they are clearly leading in the wrong direction.

Only 28 films in the sample (23%) feature a woman or girl in the lead role or otherwise sharing the story with another main character. The study also considers the gender balance of film casts (where 45 to 55% of characters are women or girls). Only 12 films met this criteria (10%). When women characters are featured in the main storyline, they appear in highly femininised genres. For example: women feature in 33% of comedy roles; 34% of dramas; and 29% of animated movies, but they make up only made up 23% of characters in action/adventure films.

The study included 1,452 film makers and people working in key roles behind the scenes. Women make up only 7% of directors, less than 20% of writers, and 23% of producers. The UK (27%) and China (17%) are comparably better, while France, Japan, Korea, Russia, and the USA are below the industry average of 7%.

Around 60% of younger characters (children and teenagers) are boys while 40% are girls. While 34% of men are cast as characters aged 40 to 64 years of age, only 19% of women are depicted as middle aged characters. The researchers find this is especially problematic given that the younger women who do appear in films are highly sexualised. 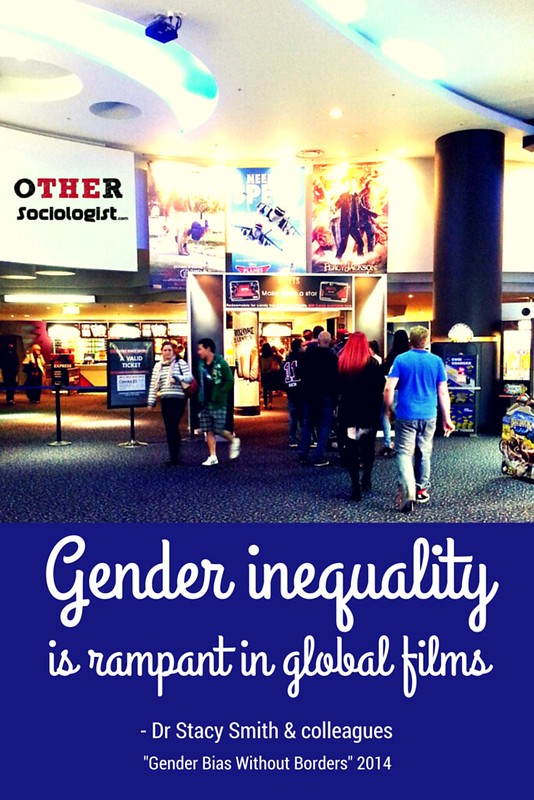 There are some slight national variations with women in German, Australian, Indian and French movies relatively more likely to wear sexually revealing clothes in comparison to the UK, Russia, China and Korea. Japan, the USA, co-productions from the UK and USA, and Germany are more likely to feature thin women, while France and Russia are slightly below the national average in representation of body type. Regardless of the slight variations, “no matter the territory, female characters cannot escape the emphasis on physical appearance.”

The study did not do a cross-comparison of gender and race but it finds that 57% of characters are White; 33% are Asian; only 3% are Black characters; and 1.6% Hispanic/Latino/Spanish. Five percent of speaking characters are from other or mixed racial and ethnic backgrounds.

The researchers conclude that film representation is steeped in sexism:

“Gender inequality is rampant in global films. This was demonstrated by the percentage of female characters on screen, the lack of girls and women as leads or co leads in movies, and the few females behind the camera. Not one country is anywhere near representing reality; girls and women comprise fully half of humanity. Not a third. Not a quarter. Half.”

In my comments below, I have focused on the study’s findings on depictions of women characters at work, particularly in Science, Technology, Engineering and Mathematics (STEM).

Women represent half the world population but comprise less than 1/3 of speaking characters in film. @GDIGM @UN_Women #feminism #women

Only 22.5% of movie characters who work are #women; they represent <15% of powerful jobs e.g. business, politics & #STEM @GDIGM @UN_Women

"We have more than a film problem when it comes to valuing girls and women. We have a human problem.” – Dr Stacy L. Smith @GDIGM @UN_Women

Excellent analysis of changes and narrow representation of femininity in #film. @moviesndtv via @GDIGM http://t.co/BKg7ZRuABs

3 thoughts on “Women and Girls on Film: “Inequality is Rampant””