I’ve been away for work for awhile now, and hope to bring you more on this soon. For now, I thought I’d share with you a post I had planned to  publish weeks ago, but haven’t been able to finish until now. Let’s talk about the sociology of Indian people in Australia, with a case study of the Hindu festival of Diwali in Melbourne.

Indian migration to Australia has a long history, dating back to the 19th Century,  with early records showing the British brought Indian servants (noting this may have included forced servitude). At the time of colonial Australia’s first Census, there were 1,800 Indian people in Australia. Today, Indian-Australians represent our fourth largest migrant group and they are also the biggest growing migrant group next to China, with their population doubling in the past decade, according to the Australian Bureau of Statistics.

The biggest concentration of Indian migrants live in Melbourne (169,800 people), in the state of Victoria, followed by New South Wales. The majority of Indian people in Australia speak Hindi (159,600) followed by Punjabi (132,500), but Indian people are very multicultural and multilingual, with other languages including Tamil, Bengali, Malayalam, Gujarati, Telugu, Marathi and Kannada, with minorities also speaking Konkani and Kashmiri.

Indians as a group are highly mobile. They tend to fare quite well economically and they have the highest rates of education of all migrants, with 55% of Indian migrants having at least a Bachelor’s degree. This is three times the rate of education compared to the national average. Hindu Indians (88%) and Sikh (86%) have the highest post-school qualifications of all Indian people. However a sub-group of younger Indian migrants arriving in the past two decades are not doing as well. My research shows this is due to poor policies managing international students.

Despite their successes, a significant proportion of Indian-Australians face racism, with targeted attacks towards Indian students peaking between 2008 to 2010. Even today, 39% of Indian-born migrants have experienced racism in their daily lives, from racist complaints by neighbours to vitriol whilst shopping. Social work researcher, Dr Devaki Monani, says:

Indians are most likely to experience discrimination at the higher levels of the employment ladder or find it extremely challenging to break the glass-ceiling. Executives in Banks or IT professionals often experience discrimination when they are informed that high net worth clients do not want to deal with Indians. We need to remind ourselves that in the majority all Indians migrated as skilled professionals, so I think they are highly ‘aspirational’ migrants. Unfortunately, they often find themselves as not being able to reach their full potential. This experience is deeply frustrating and challenging, making it impossible to cope with discriminatory practices

Even in the face of discrimination, Indian-Australians have made a tremendous contribution to Australian society. The rest of my post focuses on the Diwali Festival, which is celebrated in Australia’s major cities, as one example of the rich diversity of Indian-Australians.  The visual sociology here is from the Diwali Indian Festival of Light at Federation Square, in the heart of Melbourne (2014).

The Diwali or Deepavali is a Hindu Festival celebrating the triumph of light over darkness. This can stand for the spiritual victory of “good versus evil” as well as the celebration of knowledge and hope over spiritual ignorance and despair. Sociologist N. Jayapalan describes that Diwali is celebrated to mark the return of Rama, the seventh avatar of the Hindu god Vishnu, after 14 years of exile. While it is known as a Hindu tradition, it is also celebrated by Jain and Sikh people.

The festival goes on for five days, with different regions in India following slightly different rituals. Diwali starts on the new moon of Ashvin (the darkest night at the end of the seventh month of the Hindu lunar calendar). The tradition begins with the day known as Dhanteras, where people clean out their homes and workspaces in preparation for the festivities. People then decorate their homes and communities by hanging lights across rooftops, doors, windows, on temples and other buildings. This is done to welcome the Goddess Lakshmi. Gold or silver is purchased as a symbol of prosperity.

On the second day, Narak Chaturdasi, home floors are decorated with colourful designs, women decorate their hands with henna, and families prepare food and treats for the upcoming feast. The God of death, Yamraj, is celebrated, and this day also commemorates the defeat of the demon Narkasur by the Goddess Kali and Lord Krishna.

The third day, Lakshmi Puja, is the main celebration of the festival, marking worship of the Lord Ganesha and Shri Lakshmi. Families dress up and share a feast. There are fireworks displays to ward off evil spirits and many games for children. Offerings are put outside for the goddess Lakshmi and other deities. This is also a day to celebrate mothers as the embodiment of the goddess Lakshmi for all their hard work. Lakshmi brings material and spiritual fortune, as well as protection from misery and money problems.

The fourth day is Padwa/ Govardhan Puja, on the day that Lord Krishna defeated Indra by lifting the Govardhan Mountain. In the northern states, families will make a small mound for worship, while in the western states, this day marks the new year (Bestu Varas).

The fifth and final day of the festival is Bhai Dooj, a day for sibling worship. Sisters perform tilak, a ritual where they apply saffron and rice to their brothers’ foreheads, praying for their brothers’ welfare, health and long lives. Brothers give sisters presents and promise to protect them.

Celebration of the senses and kinship

The Diwali Hindu Festival is more than the Festival of Light—it is also a celebration of the senses, with fireworks (sound); the colourful rangoli designs (sight); sumptuous feast of various flavours and mithai sweets and desserts (taste); and in some regions, there are special bathing rituals involving fragrant oil (smell). The Festival also celebrates emotional bonds by allocating special days for family relationships. For example, the fourth day of the festival, Padwa, is allocated for the celebration of relationships between spouses, and the festival ends with a celebration of sibling ties.

Sociologist Dr Linda Wilks argues that festivals are a way for families and societies to affirm the importance of cultural traditions. The more public the spectacle, the higher the likelihood that the tradition will gain or retain cultural prestige. Wilks notes that festivals link into something French sociologist Pierre Bourdieu called, ‘cultural capital,’ which is the importance of culture in maintaining social and economic status. Wiks studied music festivals, but a similar idea applies to religious and cultural festivals.

Festivals are a way of bringing people together to remind society about their common values. In a multicultural society like Australia, which is home to over 200 migrant cultural groups, and over 200 Aboriginal and Torres Strait Islander cultural and language groups, festivals are a good way of sharing cultural traditions and ideas with the rest of society.

The Diwali Festival reaffirms the unique features of Indian-Hindu culture, while also celebrating new, innovative and hybrid Australian-Indian traditions, and their inclusion into our cities’ social fabric.

The dancing events at the Diwali festival in Melbourne provide a great example of what Indian-English sociologist Professor Homi K. Bhabha calls hybridity. Hybridity describes how migrants are able to balance multiple identities to navigate cultural difference, blending different influences to create new ways of being. The Diwali festival showcased different Indian traditions, including folkloric dances to contemporary music. One group presented an ‘Asian fusion,’ incorporating Indian and Chinese traditions. There are 20,000 Chinese people living in India, while there are 15,000 Indian people in Hong Kong, Macao and Taiwan. China is Australia’s third largest overseas-born group after England and New Zealand. Given the long-standing migrantion across China and India, and the Australian context, where Asian groups also intermix, these dancers showcase transnational influences.

Asian-Fusion dance group at the Diwali: Festival of LIght

Asian fusion group at the Diwali: Festival of LIght

Another group at the Diwali celebrations presented a ‘Latin Fusion,’ blending Indian dance and Latin musicality. Indian migrants were forcibly moved to Latin America in the 1830s, as indentured servants to British colonies in the Caribbean, followed by other waves of Indian migrants from the 1900s onward. The largest Indian communities today continue live in the Caribbean, including 1 million Indian-Latin people in Trinidad and Tobago (500,600), Guyana (395,350) and Suriname (150,500), but other Indian-Latins live across Latin America, notably in the Dominican Republic (9,000). While these descendants continue to face racism, Indian-Latins have grown in their economic influence across Latin America.

As far as the Diwali festival in Melbourne goes, it was a lovely show and an overall wonderful day, showing some of the rich cultural influences of Hindu Indians in Australia.

Latin fusion group at the Diwali: Festival of Light 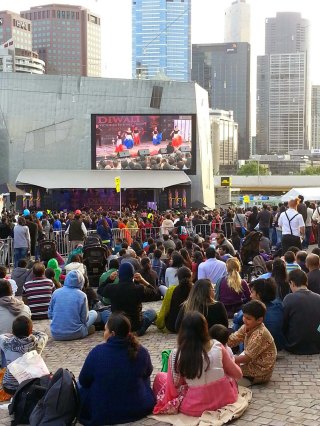 One thought on “Sociology of Indian-Australians and the Diwali Festival”