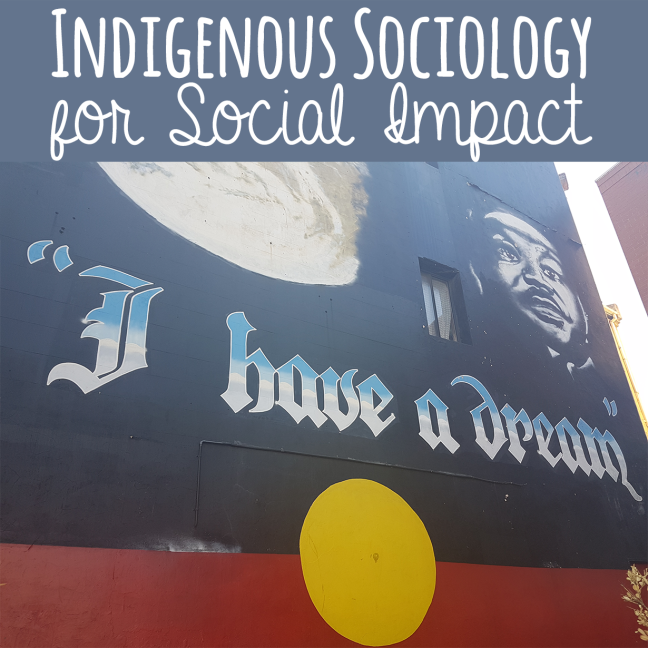 The history of Aboriginal and Torres Strait Islander social justice activism to destabilise and overcome colonial practices in Australia began with the British invasion in 1788 and has continued to the present-day. These acts of social and political organisation have strong sociological resonance that should centrally inform sociological inquiry in Australia. Yet Indigenous knowledges are peripheral to the discipline of sociology. This post is the first in a series exploring ways to decolonise sociology, through the leadership of Associate Professor Kathleen Butler, sociologist and Aboriginal woman belonging to the Bundjalung and Worimi peoples of coastal New South Wales.

To redress the problematic racial dynamics of sociological theory and practice, Associate Professor Butler convened the first Indigenous Sociology for Social Impact Workshop at the University of Newcastle, Ourimbah campus, on Darkinjung land. Held on 27-28 October 2016, Professor Butler invited Indigenous and non-Indigenous sociologists from different parts of Australia to consider gaps and opportunities in addressing the ongoing impact of colonialism in our theories, methods and practice.

Today’s post places the workshop in historic context and summarises the discussion. I also include reflections by Associate Professor Butler about the outcomes from the workshop. I end with a set of questions that emerged from the workshop that we should now face as a discipline in order to centre Indigenous knowledges and methods in sociology.

END_OF_DOCUMENT_TOKEN_TO_BE_REPLACED

I am writing to you from Sydney, land of the Gadigal people of the Eora Nation, who have looked after these lands for over 75,000 years (and much earlier by other accounts).

Today is a painful day for Indigenous Australians; the 26 January is a date commemorating the day British ships (”the First Fleet”) arrived on Aboriginal and Torres Strait Islander lands. It is a day that marks the decimation of First Australians; the dispossession of their land; the removal of children to be raised in Missions and in White foster homes with no ties or knowledge of their culture (“the Stolen Generation”); amongst many other human rights crimes. This history impacts Indigenous life chances in the present-day.

Australia Day was only observed by all states and territories from 1935 and it was relatively recently that it was made a national holiday in 1994. Indigenous Australians have been protesting this date since 1938, on the first ever Day of Mourning, 150 years after colonialism. Since then, Indigenous Australians have also held both Invasion Day and Survival Day events to continue resistance against colonialist, patriarchal views of what it means to be Australian.

Join me through three case studies about the problems arising from Australia Day celebrations. First, I analyse a national advertisement that has been lauded as well as critiqued for its depiction of colonial arrivals. Second, I discuss a funding campaign to reverse the removal of Australia Day billboards featuring two Muslim girls. Third, I reflect on sociology’s role in the change the date protests, given the colonial origins of our discipline.

These three case studies will allow us to think about the limits of mainstream feminism and the gaps in sociological practices. I end with advice about how we might contribute to the change the date protests.

Please note that in this post, I use the phrase Australia Day to contextualise recent national debates about the celebration held on the 26 January. This phrase is hurtful to Aboriginal and Torres Strait Islander people and I use it only in context of discussing its colonial origins.

END_OF_DOCUMENT_TOKEN_TO_BE_REPLACED

WARNING: Aboriginal and Torres Strait Islander readers are warned that the content on this page may contain images and references to deceased persons. (Why this warning?)

The Council of Australian Governments has conducted a national review of Indigenous socio-economic outcomes. Its recent report finds that while some measures are improving, there is still a large gap between Indigenous and non-Indigenous Australians. This post provides a snapshot of the findings with a focus on education and responses by the state. One of the solutions being offered to improve educational outcomes amongst Indigenous youth is to send them to boarding schools. I discuss this in relation to Australia’s colonial history and the Government’s paternalistic views on Indigenous welfare.

I review other approaches to Indigenous education, which focus on working to students’ strengths in order to improve outcomes. This means making curriculum more focused on applied skills, vocational training within remote communities, and ensuring knowledge is culturally relevant. At the same time, educational efforts must avoid “pigeon holing” Indigenous students and teachers. Instead, education needs to make leadership and career pathways more accessible, and ensure that Indigenous insights are being fed back into the education system.

Finally, my post explores how sociological teaching and activism needs to change in reflection of the history of Indigenous educational practices.