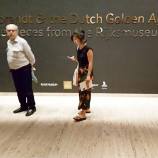 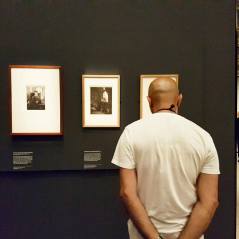 This is my sociological reflection over the exhibition, Rembrandt and the Dutch Golden Age. There was only one woman artist in the exhibition, White Dutch artist Rachel Ruysch. There were no people of colour, except in one landscape depicting slavery of African people, in a work celebrating the growth of Amsterdam. Other than this, no other references to colonialism, even though there was a giant ship in the exhibition and a landscape of Brazil referencing an “outpost.”

There was a painting of the Burghers, a group descendent from Sri Lanka and various European origins, especially Potugese and Dutch, but the exhibition makes no reference to class or race. The term Burgher derives from the Dutch word for “citizen” or “town dweller”, mixed with the French word “bourgeois” which refers to the upper class. The Burghers were actually upwardly mobile middle class who made a good living as merchants and commissioned paintings to reflect their modest wealth. While most were of mixed racial background, they are painted as White.

Finally, in one of the photos you see Rembrandt’s painting “Bust of a Man in Oriental Dress,” depicting a White man wearing a turban – an example of White upper class appropriating the culture and religion of Others, but the exhibition explains this as “exotic looking garb.”The exhibition is excellent, but like many, it whitewashes history and replicates racial, gender and various inequalities by papering over relations of power in art.

The exhibition is on in the Art Gallery of New South Wales, Sydney.

Rembrandt and the Dutch Golden Age.

[Photos: 1/ woman with long white hair stares at “Bust of a Man in Oriental Dress. 2/ a White man and Asian woman outside the exhibition. 3/ A young man walks towards the camera as other art vistors wander around the gallery. 4/ people take photos of the large paintings on display. 5/ a bald man stares closely at photographs of Rembrandt. 6/ a man and a woman look at a large golden painting featuring architecture. 7/ visitors walk around the busy exhibition.]

My trip to New Zealand Aotearoa was lovely. I was a guest of the Women in Science group, the New Zealand Association of Scientists and various other partner and sponsor agencies. In Wellington, I gave a talk about gender equity and diversity. I discussed how intersectionality can be used in various national models of change, to increase the number of minorities and White women in leadership positions. I also addressed some considerations for creating a more inclusive research culture that draws leadership from Indigenous scientists. I then joined a panel of distinguished academics to further discuss diversity in the local context.

Most of my trip in New Zealand was spent at the University of Auckland. I gave a talk on intersectionality and the March for Science as well as attending various meetings providing advice and listening to progress and thinking on inclusion in science. The campus is stunning. This is the inside of the Clock Tower, an impressive tall, white building with beautiful architecture.

Check out more about my trip, the art, culture and food. END_OF_DOCUMENT_TOKEN_TO_BE_REPLACED

Being Chinese in Aotearoa: A Photographic Journey. This is a stunning and informative history of migration. It documents difficulties and triumphs in the face of ongoing racism. Highly recommend visiting if you’re in New Zealand Aotearoa. On the left you can see Appo Hocton (Ah Poo Hoc Ting), who arrived in his 20s, in 1842, to become the first documented Chinese-New Zealander. END_OF_DOCUMENT_TOKEN_TO_BE_REPLACED

A ripper of a visual sociology for June-July, 2017, begins with an interview about racism in dating, followed by a jubilant NAIDOC week community event in Redfern. We indulge in a plethora of thrilling art. We travel through Inner Western Sydney. We come upon environmentally friendly revenge by a spurned lover. And the sociology of trolleys gives us three surprising appearances.

This was my day:  filming on race and dating with Santilla Chingaipe and Kaila Perusco for Conscious Dating Co. Thoughtful discussion of sexual racism, meaningful relationships, how to address structural and unconscious bias in Australia, and much more. Intelligent, funny and generous women plus an awesome crew, with beautiful food and hosts. Parliament on King is a luscious cafe and it makes for a beautiful set! Book lovers’ heaven. (8 June) END_OF_DOCUMENT_TOKEN_TO_BE_REPLACED

I’m at the “Love Is… Australian Wedding Fashion” exhibition at the  Powerhouse Museum.

This was a very interesting exhibition but it’s not really about “Australia.” It’s about White Australia. It starts with a room about “early history” – which begins with “convicts.” Already Aboriginal and Torres Strait Islander people are erased, but to add injury, the room uses an unnamed Indigenous song that plays in the background to a room full of White colonisers. There is only one Aboriginal designer in the entire exhibition – Dharruk and Darkenjung woman Robyn Caughlan (in this video) – but no couples. END_OF_DOCUMENT_TOKEN_TO_BE_REPLACED

The works on display are by contemporary artists, some of whom also work in Australia. The artists explore the interlocking influences of religiosity and social activism on modern politics and colonial forces. END_OF_DOCUMENT_TOKEN_TO_BE_REPLACED

Mervyn Bishop, a Murray man, was the first Aboriginal person to work at a major metro daily newspaper, joining the Sydney Morning Herald in 1962. In 1971 he was named Australian Press Photographer of the Year. He would go on to cover major events, including the anti-war protests of the 1960s, the Bicentennial in 1988, and Aboriginal community life in remote regions of Australia. END_OF_DOCUMENT_TOKEN_TO_BE_REPLACED

“This is where all the famous paintings are.” People gather in the main Impressionists room in the National Gallery of London, photographing themselves in front of one of Vincent Van Gogh’s most famous work, Sunflowers, but mostly ignoring his other equally celebrated artwork, Chair, and completely missing the artists who influenced him such as Pissarro.

This selfie enthusiasm is new; the Gallery only started allowing photos in August 2014 – and very reluctantly. The Wire reported the dismay of art critics at the time:

“I have to say, a bit of my soul died each time someone photographed a piece or even worse, took a selfie without actually looking at it with their own two eyes.” (Art History Newsletter)

“The last bastion of quiet contemplation is now to become selfie central, where noisy clicking smartphones and intense flashlights will prevail over any ‘eccentrics’ who want actually to look at art. The gallery used to be a haven where looking at pictures was prioritised. Now it will all be about taking your own pictures.” (Michael Savage, author of the Grumpy Art Historian blog)

In this visual sociology installment using Vine, we go from Melbourne to Canberra to Brisbane. Hold onto your seats, it’s your visual sociology for September, October and November 2015! We’ll see opulent art and enjoy the simplicity of kite-flying and the soothing power of water.

From the Hermitage exhibition, Catherine the Great was inspired by the archaeology of Rome. 6 September

END_OF_DOCUMENT_TOKEN_TO_BE_REPLACED

A special visual sociology from the Museum of Contemporary Art (MCA), Sydney.  We start with the Energies exhibition and then explore the nature of loneliness in modern life. We end with our return to Canberra’s art precinct.

Below is ‘Encounter with the Halo Field,’ by David Haines and Joyce Hinterding.  These Australian artists live and work in the Blue Mountains of New South Wales. They blend experimental and traditional media to investigate energetic forces as well as the intersection of hallucination and the environment. 23 August 2015