Last year, I read about anthropologist Jeremy Narby’s participant observation field research with the Ashaninca, an indigenous group living in the Peruvian Amazon. His research is detailed in the book, The Cosmic Serpent: DNA and the Origins of Knowledge, as well as the follow up,  Intelligence in Nature. I’ve thought a lot about this research since. Narby’s research focuses on the way Western science constructs medical knowledge in ways that do not accommodate mystical experiences from Other cultures. Western medicine has come to adopt the Ashaninca’s knowledge of rare plants, as they have been proven to positively affect health. Nevertheless, Western scientists refuse to take into consideration how the Ashaninca gain this knowledge because it is derived through drug-induced hallucinations. This is in spite of the fact that these hallucinations come from the same plant ecosystem that Western science  is eager to plunder. How do we reconcile this knowledge divide? Narby argues that the Ashaninca’s understanding of plants and ‘alternative medicine’ must be understood in concert with their pathways to this knowledge. This includes the hallucinations which are used to commune with nature. 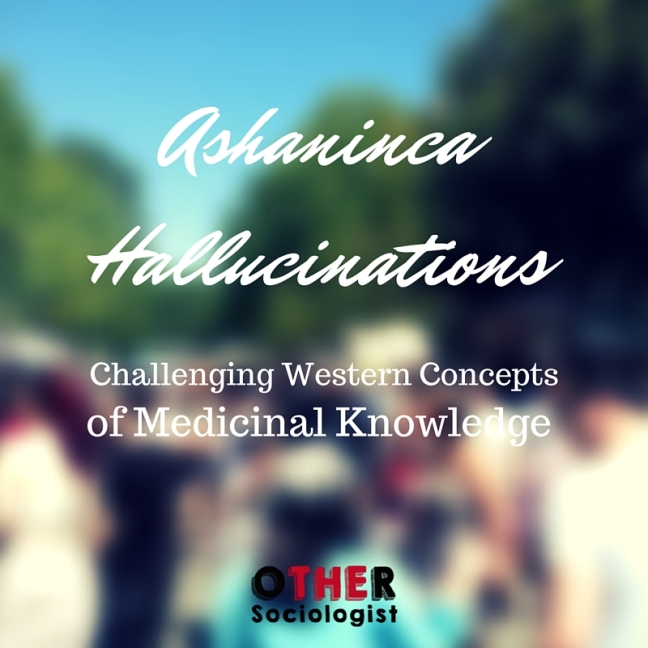 In his interview with The Best of Our Knowledge, Narby reflects on his research amongst the Ashaninca (Asháninka or Asháninca). Narby talks about how taking the hallucinogen plant ayahuasca changed his ideas about consciousness and Western knowledge. Narby conducted the research as part of his PhD dissertation at Stanford University in the USA. He describes himself as a former ‘Marxist anthropologist’ who was unable to make much sense out of his field research as a postgraduate student. In the end, Narby did not use the ayahuasca data in his thesis. It took him eight years to return to his data, but he hopes his analysis will show Western societies a new way to think about human perception.

Narby describes that the Ashninca ‘essentially viewed plants and animals as people – as entities that you could interact with’. The first time that Narby tried the ayahuasca, he was overcome by what he saw and heard. As he puts it: ‘this is the television of the rain forest’. He felt a ‘connection between the vegetale and the human’. He saw his hallucinations as ‘an anecdote to the anthropomorphism in anthropology’. He also says that the visions helped him acquire a ‘shamanic level of behaviour’.

Narby notes that although Western science has come to appreciate the knowledge the Ashaninca people have about plants, there is resistance to understanding the process by which this knowledge is acquired. Narby says it is a matter of ‘human rights’ to understand where the Ashaninca’s plant knowledge comes from ‘on their own terms’.
Narby calls himself an agnostic and so for him the mystical aspects of the hallucinations are not about a religious experience. Rather, he says, he is ‘interested in knowing’. He sees that the practices of the Ashaninca might help to advance some of the profound mysteries about the way the mind works, by answering questions such as: what happens in our bodies and minds during an altered state of consciousness? Where do the images come from? Narby argues that the images are completely original – they are not simply ‘jumbled up stuff we’ve seen before’.

I’m interested in the sociology of consciousness and the sociology of knowledge. As such, Narby’s ideas are intriguing on many levels. Primarily I find this fascinating because he is advocating for a culturally relativist approach to knowledge exploration. I like his point about how Western medicine is happy to adopt the knowledge of the Ashaninca but without learning how this knowledge is acquired. Narby’s research might also be understood as a postcolonial critique of knowledge discourses.

Narby argues that the Ashaninca’s learning about their environment must absolutely happen through hallucinations. Consequently, he advocates that his data collection was dependent upon his participant observation methodology. That is, he was totally immersed in another culture and participated in all their daily and spiritual rituals. This meant he felt he had to take these powerful hallucinogenics in order to see the world as the Ashaninca see it. Participant observation is a widely accepted anthropological approach. Nevertheless, the question becomes: how can other people understand the world as the Ashaninca see it if they don’t share in the same alternate consciousness? I don’t know any ethics board in Australia that would approve this sort of research today, but Narby’s broader point is important: Western medicine does not wish to acknowledge this sensory way of learning. Not taking the ayahuasca is one thing – it is a powerful drug after all. Yet not being willing to acknowledge the cultural significance of how the Ashaninca’s knowledge is experienced is a larger problem. This speaks to the way indigenous knowledge and spirituality is sidelined as part of the rubric of “alternative medicine”.

Mainstream Western medicine is slowly conceding that such medicines can add some complimentary value to their treatments, so long as the status quo (“the Medical Model”) is not disrupted. Talk of cultural and metaphysical experiences just makes medicine too messy, doesn’t it? Iin this interview with Deoxy, Narby argues that Peruvian shamanistic knowledge has a lot more in common with Western science than meets the eye, especially with microbiology:

Both shamans and molecular biologists agree that there is a hidden unity under the surface of life’s diversity; both associate this unity with the double helix shape (or two entwined serpents, a twisted ladder, a spiral staircase, two vines wrapped around each other); both consider that one must deal with this level of reality in order to heal. One can fill a book with correspondences between shamanism and molecular biology…

Most definitions of “science” revolve around the testing of hypotheses. Claude Levi-Strauss showed in his book The Savage Mind that human beings have been carefully observing nature and endlessly testing hypotheses for at least ten thousand years. This is how animals and plants were domesticated. Civilization rests on millennia of Neolithic science. I think the science of shamans can complement modern science by helping make sense of the data it generates. Shamanism is like a reverse camera relative to modern science.

This is worth highlighting: “Shamanism is like a reverse camera relative to modern science”. Western scientific reluctance to understand Ashaninca spiritual knowledge and experiences is bound up with the broader reluctance of medical doctors to acquiesce their power and authority to natural therapies.

Meanwhile, the ecosystem that sustains the Ashaninca is under threat due to logging, dams and other hydroelectric projects planned by the Brazilian and Peruvian governments. In December last year, Alan Taylor covered the Ashaninca plight for The Atlantic, noting that the dam projects are in violation of the Ashaninca’s human rights.

The UN Declaration on the Rights of Indigenous People outlines that development cannot be carried out on indigenous lands without “the free, prior, and informed consent” of the indigenous owners. The Ashaninca were not consulted on this projects. They have been protecting the Ene River and its surrounds for centuries, through colonial expansion and various environmental catastrophes caused by illegal logging. While the most recent dam project is on hold due to conservation efforts, the project has not been withdrawn all together. If it goes ahead, it will devastate an ancient ecosystem and it will displace 14,000 Ashaninca across Peru and Brazil.

The Ashaninca paint their faces every day to reflect their moods. The paint is made from the seeds of the achiote tree; this pigment is known as urucum. Urucum has become one of the world’s most widely used natural food colourants. Stephen Corry of Survival International says:

“Annatto is one of the many gifts that tribal people have given humanity, and is testament to their encyclopaedic knowledge of their ecosystems.”

Image credits: Paintings by Pablo Amaringo via Head Over Heels. Ashaninca photos by The Atlantic.