Part 2 of 3 of my visual sociology for 2019. Take in the flavours of April to June. We start with a look at the architecture of inclusion. Then we go backwards, so you may join me in a feminist retaliation. Let’s then reminisce over racial justice at the Sydney Writers Festival, and think deeply on Aboriginal women’s family bonds through the wonderful play, Barbara and the Camp Dogs. We go on to trace the joys of the Finders Keepers market, the Sydney Comedy Festival, and Peruvian treats. We bear witness to the destruction being imposed by the Adani mine. I also bring you a cornucopia of the sociology of trolleys, and a special guest appearance by the enigmatic Bubsy.

Here is the redesign of the entrance to the heritage listed Redfern Station (by builders Gartner Rose). An $100M upgrade was announced in February to address accessibility. The station currently fails to meet standards set by the Disability Discrimination Act. There are only one set of lifts to two of its 12 platforms. Its underground platforms (11 and 12) are considered a significant health risk in the case of fire, second only to Town Hall.

END_OF_DOCUMENT_TOKEN_TO_BE_REPLACED

Rhythm, Colours, Flavours of Peru is an event of the Open Inner West festival. END_OF_DOCUMENT_TOKEN_TO_BE_REPLACED

Inka Marka playing at the The National Multicultural Festival in Canberra.

One of the most beautiful and famous Peruvian songs, El Condor Pasa. Played here by Inka Marka.

END_OF_DOCUMENT_TOKEN_TO_BE_REPLACED

Lourdes Lucila Saavedra Pilco is an Indigenous Peruvian woman and farmer who always wanted to be educated but did not get the opportunity when she was younger. Now aged 43 she has learned new skills in sustainable livestock farming, that not only responds to climate change, but also provides her more economic autonomy as a woman. In Spanish, she says:

“I was the first woman [from my village] to go to Lima to do business with my livestock. … [People said], ‘You’re a woman. You’re not going to be able to.’ I loaded my cattle in the truck and I went to Lima. Women can work. We can do business. Starting with me, many women have also become leaders.”

Pisac is a Peruvian village in the Sacred Valley on the Urubamba River. The village is well-known for its market every Sunday, Tuesday, and Thursday, an event which attracts heavy tourist traffic from nearby Cusco. One of its more notable features is a large pisonay tree which dominates the central plaza. The sanctuary of Huanca, home to a sacred shrine, is also near the village. Pilgrims travel to the shrine every September. The area is perhaps best known for its Incan ruins, known as Inca Písac, which lie atop a hill at the entrance to the valley. The ruins are separated along the ridge into four groups: Pisaqa, Intihuatana, Q’allaqasa, and Kinchiracay. Intihuatana includes a number of bathes and temples. The Temple of the Sun, a volcanic outcrop carved into a “hitching post” for the Sun (or Inti), is the focus, and the angles of its base suggest that it served some astronomical function. Q’allaqasa, which is built onto a natural spur and overlooks the valley, is known as the citadel.

Peru’s Señor de Choquekillca Festival is held in Ollantaytambo, near Cuzco (the ancient Incan city of Machu Picchu). The festival commemorates a local saint and it also represents the Inca’s mocking of the conquistadors who invaded and almost obliterated the Indigenous Quechua culture.

Writing for the Huffpost, Andrew Burmon muses that the festival comes across as a “strange” multicultural event that doesn’t match Western ideas of multiculturalism. The festival simultaneously represents an embrace of certain elements of Catholicism which are blended with Indigenous spirituality, as well as a rejection of Spanish colonialism.

In Western nations, multiculturalism takes on many contested forms, but it is usually about tolerance of cultural and religious difference as a means of social integration of minority groups. This festival in Ollantaytambo subverts this notion by recreating the history of colonialism as an act of cultural and religious rebellion. The town honours its tradition by staging people drinking outside a church as well as by having a cross procession.

The people dress up in beautifully ornate costumes as well as grotesque masks in a celebration, condemnation and reconciliation of the past.

Senor de Choquekillca is a strange sort of festival. A religious celebration in honor of a small town boy made saint that has morphed into an occasion for trans-generational venting, Choquekillca provides the citizens of the small town of Ollantaytambo with an occasion to dress up in white face and mock the conquistadors who destroyed the Inca civilization flourishing in this part of the Peruvian Andes…

That is what is great about the party: Like history itself, it doesn’t really make sense.

Peru’s Christian faith is a spoil of war, but no less genuine for being coerced. Likewise, the Incan culture is mourned despite being obviously extant. Unlike westerners, who more often than not see multiculturalism as the amalgamation of different peoples, the people of the Sacred Valley – inundated though they are by Machu Picchu-bound travelers – are multicultural on the inside, contradictions be damned.

It is hard not to love a people not only capable of holding contradictory ideas in their heads, but willing to celebrate them in concert. 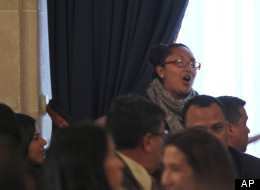 Right when he started talking about achieving the American Dream, and how every child deserves to live it. I interrupted and said, ‘I’m undocumented and I have a dream, are you still supporting “self-deportation?”’.

Last year, I read about anthropologist Jeremy Narby’s participant observation field research with the Ashaninca, an indigenous group living in the Peruvian Amazon. His research is detailed in the book, The Cosmic Serpent: DNA and the Origins of Knowledge, as well as the follow up,  Intelligence in Nature. I’ve thought a lot about this research since. Narby’s research focuses on the way Western science constructs medical knowledge in ways that do not accommodate mystical experiences from Other cultures. Western medicine has come to adopt the Ashaninca’s knowledge of rare plants, as they have been proven to positively affect health. Nevertheless, Western scientists refuse to take into consideration how the Ashaninca gain this knowledge because it is derived through drug-induced hallucinations. This is in spite of the fact that these hallucinations come from the same plant ecosystem that Western science  is eager to plunder. How do we reconcile this knowledge divide? Narby argues that the Ashaninca’s understanding of plants and ‘alternative medicine’ must be understood in concert with their pathways to this knowledge. This includes the hallucinations which are used to commune with nature.

END_OF_DOCUMENT_TOKEN_TO_BE_REPLACED

There’s only one place in the world where you can view row after row of brains afflicted by mad cow disease, Alzheimer’s, and alcoholism. It’s Lima’s Museo de Cerebros, home to the largest collection of gray matter that can be viewed by the public. More than 3,000 samples of diseased brains and fetuses have been assembled by neuropathologist Diana Rivas for the Brain Museum. The museum is part of Peru’s Institute of Neurological Science, and while academics come from around the world to examine Rivas’ collection, she’s much more interested in educating the public about brain disease. She hopes that, if folks can see her damaged brains firsthand, they’ll think more about the health of their own noggins. The Brain Museum isn’t quite the largest collection of brains in the world. Harvard Brain Tissue Resource Center at McLean Hospital has around 7,000 specimens, but it’s brains aren’t open to the public. So just how has Rivas amassed such an impressive collection? It helps that she supervises 100 autopsies a year, giving her the first look at potential new candidates.