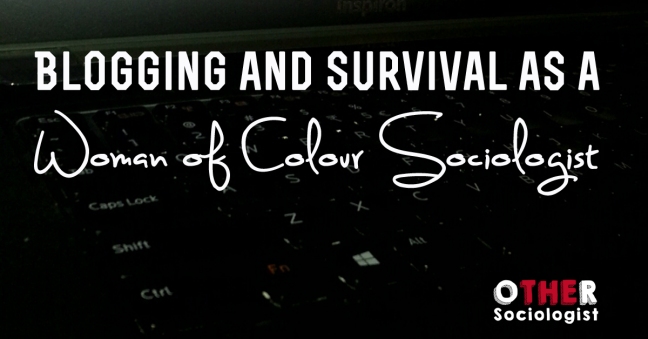 This is the story of my blog, and why blogging became a strategy to make sense of my career and my life as an Other – a woman of colour, the “non-academic” sociologist.

I started my blog in September 2011. This inauspicious date is not coincidentally aligned with the 10 year anniversary of the September 2001 attacks in the USA. Back in 2001, I was just beginning my PhD and had been trying to recruit Turkish-Australian women for my dissertation, with little success. I wanted to extend my Honours thesis, which focused on heterosexual Latin American women in Australia. A small aspect of that study had lingered, with respect to otherness: the Latin women, who had experienced much racism, expressed high support for  multiculturalism. They had many friends from various backgrounds, and some had boyfriends of diverse origins (though Latin American men were a preference). One group they would not date was Muslim men, and many referenced Turkish men specifically due to negative gender stereotypes surrounding Turkish men in the Western suburbs of Melbourne, where most of the women lived.

Given the Latin women’s experiences of racism by Anglo-Australians, this intrigued me, as it suggested what I came to term as hierarchies of otherness.

END_OF_DOCUMENT_TOKEN_TO_BE_REPLACED

In early February in Alabama, USA, police were called to investigate an elderly Indian man simply because he was walking suburban streets. The caller identified Sureshbhai Patel as as a “skinny Black man,” and therefore suspicious. Patel had only recently arrived in the USA to help his son with his newborn baby. He did not speak English, but he complied with the officers as best he could, but he was still thrown violently to the ground. END_OF_DOCUMENT_TOKEN_TO_BE_REPLACED

While people rush to defend Taylor Swift’s racist appropriation of Black female bodies in her latest video, Shake it Off, because it’s presented as “fun,” it’s worth remembering that “satire” is no excuse for whitewashing of racism. First, satire requires cultural context to be clever; it matters who is delivering the joke to whom, when, and for what purpose. Second, racism is not simply about interpersonal insults. Racism describes a system of domination where White people benefit directly and indirectly from the status quo.

Taylor Swift has positioned herself publicly as a feminist, though her enactment of these ideals was already not without problems. This video shows she has little understanding of the history of feminism and the cultural struggles faced by women of colour. Not coincidentally, White feminism is still largely resistant to racial issues. As sociologist Jessie Daniels notes, it matters that White women are at the centre of both pop culture and the feminist movement:

From Miley Cyrus to Iggy Azalea who profit from brandishing certain aspects of Black culture, to Lily Allen who similarly used Black women in a video to critique White women pop stars, Swift has added her name to an ever-growing list of rich White women in pop music who use the exploitation of women of colour to make “feminist” statements. This stands in contrast, but along a similar continuum, of White pop stars such as Gwen Stefani, Katy Perry, Avril Lavigne who commodify the culture and sexuality of “Asian” women. Asian femininity is sexy in a “cute,” clean and submissive way; while Black and Brown women’s sexuality is dangerous, dirty and untamed. Either way, White women’s cultural appropriation of minority cultures conforms to familiar tropes where White champions dominate the uncivilised Other.

The fact that White celebrities do not set out to be “intentionally racist” is beside the point. Racism does not require your intent, as racial bias often goes unexamined. In fact, the way Whiteness works is to place White people at the centre of culture so that they are protected from the everyday consequences of race relations. (And no, there is no such thing as reverse racism.) Not recognising how racism works, such as failing to understand how and why cultural appropriation and stereotypes are damaging, is an outcome of White privilege.

END_OF_DOCUMENT_TOKEN_TO_BE_REPLACED

The Wikipedia page for #YesAllWomen, a record of an anti-sexism online protest movement, is being edited to make it “less misandrist.” This Wiki page documents the Twitter hashtag that is being used internationally by women to share their experiences of sexual harassment, abuse and discrimination following the Isla Vista mass shooting in America. Some men are using this tag to listen and support women, but predictably, others are abusing it to hurt women and argue that the hashtag is “sexist against men.” The Wiki edits matter because Wikipedia has a massive problem with sexism. These edits reflect the very issues of gender violence, intimidation and power that the #YesAllWomen hashtag is trying to address. END_OF_DOCUMENT_TOKEN_TO_BE_REPLACED

The data suggest that sexual fetishes are facilitated by technology, because people can sort through physical descriptors, thus practising sexual exclusion through their potential partner choices. END_OF_DOCUMENT_TOKEN_TO_BE_REPLACED

This short video provides a useful reflection on the ongoing racial problems in South Africa. Al Jazeera interviews a newlywed couple who say that while different racial groups are now used to interacting with Others in public (at work for example), they are still uncomfortable with interracial marriages. The couple say people “aren’t used to the closeness” of multiculturalism.

Sociologist Georg Simmel examined the concept of “the stranger” (those who are considered outsiders, undesirable or “Other”) with respect to the concept of social distance. Social Distance is a measure of intercultural acceptance. Research that has applied this concept asks people to rank how comfortable they are with people who are from outside their social group. This research finds that while today Most people say they are comfortable with people from other ethnic and racial groups in their country, especially with respect to cosmopolitan culture (eating their food, listening to their music and general consumption of surface culture). People are less happy to have Others as neighbours. There is even less support for intermarriage within one’s family.

During a recent concert, Madonna lent her support to the re-election of USA President Obama and praised his support for gay rights. All highly commendable. The problem is that she reproduces the myth that Obama is a “Black Muslim.” Madonna’s heart seems in the right place; she is encouraging voting and, on the surface, “tolerance.” Unfortunately, her lack of awareness about the politics of race in America has led Madonna to inadvertently buy into the “birther” movement. Birther conspiracy theorists argue that Obama is hiding his true birthplace from the American public. Obama’s “foreign sounding” name (read: non-Anglo sounding) and the fact that his father was born in Nigeria helped fuel the the idea that Obama was born overseas and that he is Muslim. Birthers demanded the President show his birth certificate, despite the fact that he was born in the American state of Hawaii. By claiming him to be a foreigner and a Muslim, birthers hoped to remove Obama from office. By inadvertently perpetuating an element of this discourse, Madonna displays an alarming disconnect with American politics. My argument is about the deep seated power of racism – which creeps into every day consciousness as taken-for-granted “facts.”

END_OF_DOCUMENT_TOKEN_TO_BE_REPLACED

In praise of public science, I want to draw connections about why race and minority studies are central to challenging the way general audiences are presented with scientific “facts”. Below is part of an article by students from Northwestern University, responding to a critique of the utility of African-American Studies. The article was published by The Chronicle. Keeanga-Yamahtta Taylor, La Tasha B. Levy, and Ruth Hays defend the anti-intellectualism stance put forward by  by blogger Naomi Schaefer Riley, who derides the importance of African-American Studies. I love seeing students take up the challenge of public social science.  The authors feel forced to defend why the higher education sector needs courses dedicated to anti-racist, post-colonial ways of knowing.

END_OF_DOCUMENT_TOKEN_TO_BE_REPLACED

Julia Elyachar and Jessica Winegar have published a special edition of Cultural Anthropology on the Egyptian Revolution. Highlights include reflections on how the Revolution has impacted ethnography and anthropological writing and an exploration of the notion of martyrdom in the context of counter-revolution. My favourite piece is Mona Abaza’s critique of Western ‘academic tourists‘.

Abaza reports that she and her colleagues have been inundated with requests for research expertise, but without serious consideration of the ‘international division of labour’. That is, the resources, time, commitments and personal costs of lending knowledge and data to researchers from Britain and the USA who work in the safety of well-funded universities. Egyptians are hired as research assistants or translators, but their labour and subjective perspectives serve a Western reading of revolution. As a result, Abaza sees that Western academics have a tendency to discuss the Arab Spring through a lens of Orientalism.